Allow me to introduce: Alison Lohans 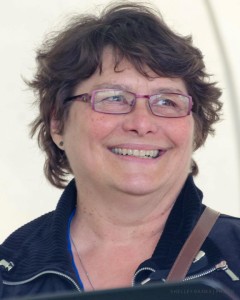 Hailing from Regina, Saskatchewan, Alison Lohans is an award-winning, internationally published author of 26 books for young people. Five Rivers is pleased to have released on September 1, an omnibus edition of her YA fantasy, Timefall. The omnibus combines Collapse of the Veil, and Crossings.

As the title suggests, the story is a time travel story about a teen mom in present-day Regina, whose baby is the long-sought mythic hero of a society a thousand years in our future. Via psychic powers and time travel, Katie inadvertently crosses paths with Iannik, a young Seer with flawed Sight, last of his line in the dwindling population of Aaurenan. Iannik is desperately seeking the baby who offers their only hope for survival. Can three misfit teens and one baby manage to save at least one of their two very different worlds?

Alison, when not writing, is also an editor and musician.

Alison Lohans has loved music for as long as she can remember. Apparently it all started when she was only a year old, and loved to dance any time she heard the high school band’s outdoor marching practice. And apparently at age three, she started playing someone’s piano by ear, which made her parents decide they should get a piano of their own and start Alison on piano lessons, which began when she was five. As a result, she learned to read music before she could read words.

Alison played first trumpet in the Reedley High School band – an important part of her life back then.

In elementary school, Alison learned trumpet in the school band, which she continued for the rest of her school years, adding French horn during her last year of high school, which she played throughout university. When she was twelve, she realized she’d probably need another career in addition to writing, so decided to become a school band teacher – which she actually did many years later, upon moving to Regina.

When she turned 15, her parents gave her an alto recorder for her birthday. Alison taught herself to play it, and never stopped. She plays regularly every week and, for the past 10 years, has also been teaching an adults’ recorder class called the Allsorts Ensemble. She has more than five recorders including sopranino, soprano, alto, tenor and bass – but mainly plays the alto recorder and, when she teaches, the bass recorder.

At California State University-Los Angeles, Alison participated in as many music groups as possible while majoring in music. She also took as many creative writing classes as she could fit in. When she took her teacher training at the University of Victoria, she focused on teaching music in addition to classroom subjects. Years later, when Alison completed her M.Ed. degree at the University of Regina, her thesis was about how young cello students practiced at home. An article based on her thesis won an award for graduate students’ research in music.

Alison’s older son John made forays with the violin and later the clarinet, and Alison often practiced with him. When her younger son Chris started taking cello lessons at the age of six, Alison totally fell in love with the cello. She has been taking cello lessons herself ever since 1996, and is very excited about the new cello she recently bought. 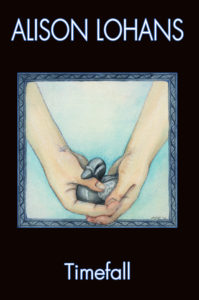 Alison’s YA fantasy, Timefall, is now available in both trade paperback and eBook, directly through Five Rivers, and your favourite online retailer.