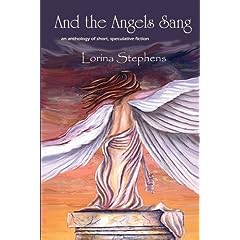 A reader review of And the Angels Sang appeared last week on LibraryThing, which was cross-posted to Amazon.com. We thought we’d share.

Lorina Stephens demonstrates mastery of distopian/strange fiction, sci-fi, and fantasy in this recent seventeen story anthology. Although many pieces are previously published, shorter unpublished works such as ‘Protector’, ‘The Gift’, and ‘Zero Mile’ are captivating looks at phenomena just on the edge of our current reality – while longer pieces such as the futuristic Jaguar (my favorite) really allow Stephens to shine by allowing room to more fully explore her characters.

Though the collection is split among three genres, all of the stories touch upon the common theme of the individual’s struggle for self-determination against external oppressive influence. The theme plays out in the guise of yearning for motherhood in a eugenic society (‘Have a Nice Day and Pass the Arsenic’), the abused (‘Darkies’), an empath trapped in the service of society (‘Protector’), mortality (‘The Gift’), and thirteen other ways.

Despite being variations on a theme, all of the pieces are original, and the storytelling is far from repetitive. The author deftly shifts from the eerie to the mundane creating a satisfying reading experience, each story allowing the reader unique immersion in the psyche of a different character.

‘And the Angels Sang’ is highly recommended for anyone interested in speculative fiction, sci-fi, or fantasy, as Stephens’ writing will carry the adherent of any one genre seamlessly into the others. Though the anthology was 25 years in the making, I certainly hope to see more from Stephens – and soon.