A rainbow of skittles to celebrate…and leather
Don’t forget to join Michell Plested in Ponoka this Saturday
We’re pleased to introduce you to a debut novel by author Sally McBride, Indigo Time. 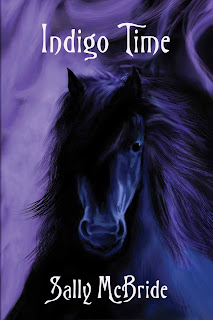 Marrula Tamara, once Empress of Worlds, has been exiled for treachery to a planet called Strand. She has one great treasure: the engineered horse Raj’azul. In his blood lies the secret of her immortality…and the seed of her downfall.

As her fellow exiles form a primitive society, centuries pass while Marrula schemes revenge. She needs three things: Raj’azul’s blood, the time-twisting mind of her own great-granddaughter, and the utter ruthlessness to use them both. But when her rebellious slave Warrek realizes Marrula is about to destroy a world to save herself, he steals the horse and vanishes into the wild mountain territories. He must remain free long enough to kill the innocent girl and thwart Marrula’s plan.

But in remote Tarlannat Hold he finds a woman even more beautiful and ruthless than Marrula…the doomed girl’s mother, Kael. And Kael knows what is at stake.

If these three women’s rogue Talents meld, time itself will be unwound and the universe destroyed. Warrek must join forces with the one man who truly despises him and battle his way to the center of the coming time storm. Together, these two pawns might succeed in toppling a Queen….

Sally McBride’s short stories and novellas have appeared in Asimov’s, Fantasy & Science Fiction, Realms of Fantasy, Northern Frights and many more magazines and anthologies. Her novella The Fragrance of Orchids won Canada’s Prix Aurora Award. She has taught fiction writing and edited speculative fiction. Born and raised in Canada, Sally lives in Idaho with her husband and cat.

Indigo Time releases August 1, 2013, and is available now for pre-order in both print and eBook. Copies will also be available at When Words Collide at the On Spec dealer table (many thanks to Diane Walton and crew for their support.)
We think you’re going to love this great new Canadian voice.