The story revolves around an old woman hanging in a cage, countered by a young woman who slaves on a rich lord’s estate and struggles to discover and assert her identity in a primeval, barbaric world. From slave dens to merchant cities and isolated mountains, Dorsey explores gender, identity and freedom in an elegantly phrased and emotionally shattering narrative.

Originally published in 1997 by Tor Books, Black Wine went on to win the James Tiptree Jr Award, the Crawford Award, and the Prix Aurora Award, and received wide critical acclaim. A few of those reviews were:

Fantasy or a remote future, it doesn’t really matter: the careful braiding of self, places, and times insidiously pulls you in, up to the point where you realize you don’t know anything anymore, and then on the other side, you suddenly see the story, the words, and even the genres, more completely: inside out. That’s Candas Jane Dorsey’s rare gift as a writer. She makes you wiser, and never cheats.

In terms of technique alone, Black Wine is one of the most sophisticated literary SF novels of the year….Black Wine lives in its passionate prose and startling imagery….A rewarding and moving novel.

As brilliant as William Gibson, as complex as Gene Wolfe, with a humanity and passion all her own. Candas Jane Dorsey isn’t just a comer, she’s a winner.

Dorsey’s writing is unflinching and powerful, weaving a complex story about personal freedom and individuality. Fans of Joanna Russ and Ursula K. Le Guin, in particular, will find much to admire here.

Like its title, Black Wine is rare and darkly glowing with iridescence. A taut, spare, wonderful creation, it is justly deserving of consideration for the awards for which it will certainly be nominated. 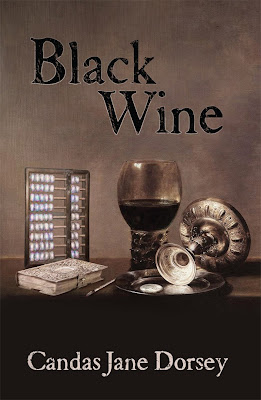 This new release is as a 6 x 9 trade paperback and eBook, with cover design by Jeff Minkevics. Minkevics drew inspiration for his composition from the 16th century Belgian artist Pieter Claesz, in particular the still life entitled Still Life with Wine Glass and Silver Bowl, adding in elements from Dorsey’s story such as the opal abacus, the silver coin, glass-nibbed pen and of course the diary which underpins much of the narrative.

Black Wine is now available for pre-order in trade paperback until October 1, 2013, at a special discounted price of $15.00 (regularly $24.99). Black Wine will be available for purchase directly from Five Rivers, and online booksellers worldwide.