The Boy on the Bicycle in the news

Home / Blog / Uncategorized / The Boy on the Bicycle in the news

This past week Nate Hendley and Ron Moffatt appeared on the Sault Ste. Marie Public Library to speak about Nate’s book The Boy on the Bicycle. 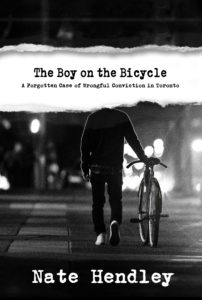 This meticulously researched journalistic investigation into the wrongful conviction of Ron Moffatt as an adolescent was the subject of the presentation. Ron, now a senior living in Sault Ste. Marie, was only 14 when Toronto police bungled a conviction regarding the heinous murder of a seven-year-old boy on the CNE grounds, basing a great deal of their evidence around a boy on a bicycle. Ron, who was coerced into a false confession, was wrongfully convicted of the crime which had in fact been committed by serial murderer who had brutally slain two other children, using a bike to lure them. The irony was, Ron couldn’t even ride a bike.

There were about 50 people in attendance at the Sault St. Marie Library presentation. For those of you in the area, Coles in Station Mall is carrying the book. Elsewhere it can be ordered in print and ebook through your favourite online bookseller, or directly through Five Rivers.

Both Nate and Ron recently were interviewed by CBC Radio. The interview is available below:

And CTV also interviewed Nate and Ron. The interview can be viewed here.