5 stars for Hunter’s Daughter at LibraryThing

Five from Five: Five Rivers’ Book Launch in Victoria BC
Eye of Strife ‘a page-turner’ says Goodreads reviewer
Great review in from a Early Reviewer at LibraryThing for Nowick Gray’s crime drama set in 1960s Ungava. 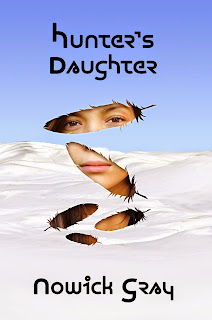 This review was written for LibraryThing Early Reviewers.

I received this through the Early Reviewers’ program.

This is by far the best book I have received through Library Thing’s Early Reviewers’ program.
A tense crime story, this is not the usual sort of police procedural (a genre I read often and enjoy). The difference was that this is placed in a particular culture clash: between Inuit people of northern Canada and the (mainly and dominant) white Royal Canadian Mounted Police.
This made for a fascinating story. The police officer, working against incredible cultural odds in northern Quebec, trying to solve a murder mystery in really remote parts of that province. The native people, some of whom have had no contact with ‘western’ people, have a very different way of dealing with the issues that arise.
I enjoyed this story from the very start to the end. The setting was just so different from my personal experience that I was in thrall. The culture clash, while set in this story in the 1960s is just as real today in places where native peoples have no way of understanding the ways of the ruling culture.
For a complete outsider, this was great story-telling. Thank you Nowick. I’ll be looking for other books of yours. (

Hunter’s Daughter is available in print and eBook formats directly from Five Rivers, or from your favourite online bookseller.

12
Jun 2015
By Lorina StephensHunter's Daughter, Nowick Gray, ReviewsComments Off on 5 stars for Hunter’s Daughter at LibraryThing