Paula Johanson talks about Tower in the Crooked Wood
Five from Five: Five Rivers’ Book Launch in Victoria BC
We asked the same five questions of the authors of the Prime Ministers of Canada series.

Mark Shainblum is one of those authors. His biographies of John A. Macdonald and Wilfrid Laurier will release in 2017.

Mark Shainblum is a journalist and communications professional. He has freelanced for The Montreal Gazette, Quill and Quire, Hour, University Affairs and Report on Business, among many other publications.

He has also worked extensively in communications, media relations, public affairs and digital media management in several sectors. including entertainment, post-secondary for McGill University’s Admissions Office, Faculty of Science and Media Relations Office. His other clients and employers have included the Just for Laughs Comedy Festival, Airborne Entertainment, The Lady Davis Research Institute and the Montreal Holocaust Memorial Centre. He is now Manager of Commodity Coordination and Communications for the Canadian Horticultural Council.

Mark was born and raised in Montreal, and currently lives in Ottawa with his wife Andrea and daughter Maya.

For Mark the most important question of the five we asked was his response to the comment Canadian history is boring. He had this very eloquent statement to make:

I’ve thought a lot about this question, especially when John Dupuis and I edited Arrowdreams, the first anthology of Canadian history stories. Canadian history is boring if, yes, as you say, all the rough edges and nasty bits are stripped away from it. And if we teach it in a way that deliberately attempts to de-mythologize it. I’m not saying that history should be taught with deliberate fallacies, like George Washington’s famous cherry tree, but by the same token, we shouldn’t minimize grand achievements because blowing our own horn is somehow “too American”. Just because the Americans overdo it and blow some pretty mundane events and personalities from their revolution all out of proportion, it does not follow that we should teach Canadian history by minimizing great accomplishments (or terrible crimes, such as the treatment of the Metis out west).

The biggest issue still seems to be that because Canada didn’t have a revolution, our history is boring. It’s true that we lack that dramatic demarcation, the violent cutting of the ties. But on the other hand, it’s arguable that Canada’s gradual evolution into nationhood was a revolution of a different sort. 239 years after the American Revolution, and almost 150 years after Confederation, the U.S. and Canada are both sovereign nation states. The Americans did it by staging a violent revolution that eventually killed hundreds of thousands, displaced many thousands more and set the stage for the even bloodier civil war 80 years later.

We did it by gaining the trappings of independence gradually, in stages, with far less bloodshed and outright genocide against the native peoples. But in the end, both countries ended up in exactly the same place. (Not discussing America’s relative power in the world, that’s a different issue). So who was smarter?

The first of the Prime Ministers of Canada series, Lester B. Pearson, by Gordon Gibb, is now available directly through Five Rivers in both print and eBook, as well as from your favourite online bookseller worldwide. 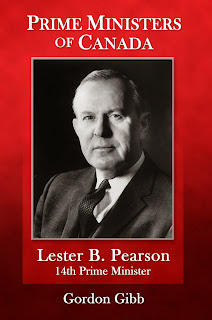