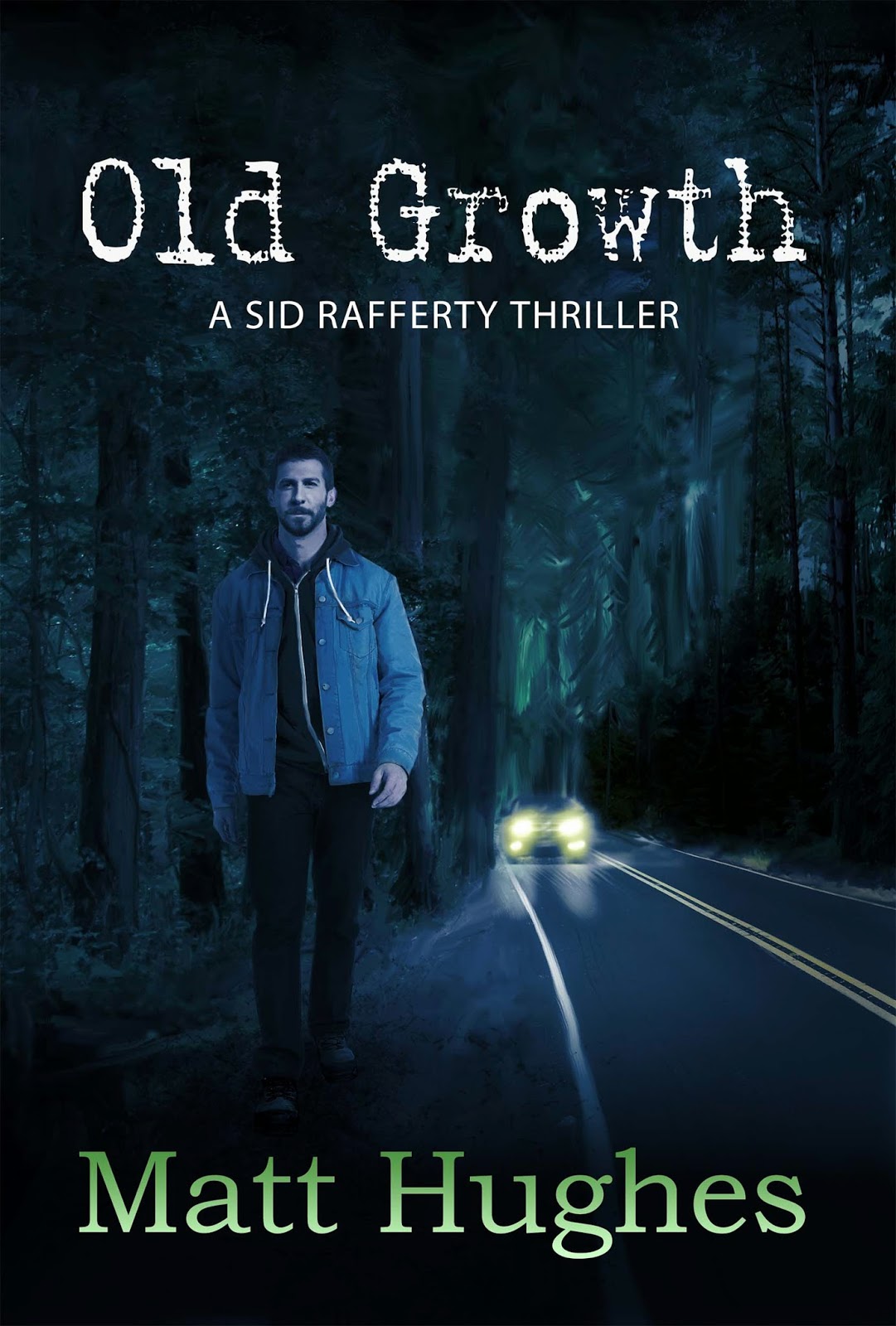 At the moment Matt Hughes is house-sitting in Montebelluna, near Venice, Italy. He took time from his exhausting writing schedule to have a chat with Five Rivers’ publisher, Lorina Stephens, and talk about his forthcoming new release, Old Growth, the long-awaited sequel to Downshift.

LS: In this Rafferty mystery you have him dealing with the more radical side of environmentalism, in this case the old growth crises that arose in the 1990s. What is it about that subject and period that attracted you?

MH: I was part of it. Through the 80s and 90s, I was a freelance speechwriter in BC. Some of my clients were bigwigs at the major forest companies. I also wrote for Socred and NDP politicians, and even did a few things for the late Jack Munro, head of the IWA. I got an inside view of the War in the Woods.

Remember, too, that most of Old Growth was written in 1996-97, when the events in the book were recent history.

LS: As a secondary story you have Rafferty toying with the idea of writing a screenplay about the life of real-life Cumberland mines miner, Ginger Goodwin, who was also a political activist and conscientious objector. Why include that backdrop to the story?

MH: I was living in the Comox Valley, where the Ginger Goodwin story was just as much alive in the 90S as it is represented to be in the book. There were fierce debates in the letters to the editor columns of the Green Sheet about whether or not a portion of the then-building new Island Highway ought to be named Ginger Goodwin Way.

Also, like Sid, I am a product of the UK working poor who, through a series of unlikely events, became someone who moved through the world of corporate executive suites and political backrooms. In some ways, I was a visitor from another world, though I was more bemused by it than Sid is — he’s never entirely sure he isn’t a class traitor.

LS: You write with controlled passion about British Columbia, her people, the environment, yet the view you have Rafferty assume is not one particularly politically popular. Will you illuminate that, please?

MH: I believe in that “sense of place” that Canadian fictioneers are supposed to be good at. Also, in the struggle between the big forest companies and the big environmental organizations, the people who actually worked in the woods and the mills were often just so much collateral damage. Nobody gave them much thought, yet there were towns dying because of the changes that were happening in the forest sector. Sid’s background makes him particularly sensitive to the plight of the ordinary Joes who were seeing their way of life disappear.

LS: In typical Hughes style, there are a lot of ambiguities in Old Growth’s characters, their motivations, their actions. Would you say that predisposition to write about the grey of informed decisions is something you consciously pursue, or is it something of which you’re not aware?

MH: I’m leery of good guys/bad guys stories. It’s a grey world, most places, most of the time. And, because of my peculiar upbringing and subsequent career path, I was always conscous of being a perpetual outsider in other people’s worlds. I often don’t share the prevailing prejudices.

LS: There is a very real, gritty quality to your writing, not unlike historical fiction writer Bernard Cornwell, also a British ex-pat. Is that a cultural quality do you think? Coincidence? Or, again, a conscious decision on your part to strip the gilding from the lily?

MH: I’m not really a British ex-pat, having been raised in Canada since the age of five. And going to live in the UK for a while as a housesitter taught me that I am most definitely culturally Canadian.

I’m a crime writer, and this is a crime story, so gritty fits. Also, it’s a first-person narrative, so the style is reflective of the central character. Sid’s a guy with serious inner conflicts and some guilt problems, of which he is painfully aware but lacks the strength to confront and resolve them. So a direct, somewhat bitter-edged style is appropriate to a story told in his voice. I don’t think his story would work if he was not conscious of his own failings.

LS: The attention to detail in the novel is quite remarkable, without being distracting. Is that the result of a lot of honing after first draft, or do you write pretty much off the cuff with little revision?

MH: The latter. Most of it was recent current events when I was writing it. And I wanted that real sense of place. It’s a story that could only have happened on Vancouver Island, after all. And Cumberland, where a lot of it transpires, is a unique setting — a coal-mining town that went to sleep when the mines closed in the fifties, like the land of Sleeping Beauty. Then came the property boom in the Comox Valley, and Cumby was abruptly reawakened — though not with a kiss.

LS: Primarily you write fantasy and science fiction under Matthew Hughes, with a huge fan following there, as well as Hugh Matthews for your media tie-ins. Do you find that separation of genre, functions and identities easier to manage than writing everything under one name? Or is there another reason for separate identities – like a clever disguise for schizophrenia?

MH: The different pen names are so that buyers for major book-selling chains won’t confuse the different lines of work. But I’m basically a crime writer who slid into writing SF. So a lot of my SFwriting is actually crime writing in a science-fictional setting.

LS: What are you working on now?

MH: A series of stories about Raffalon, an archetypal thief, that have been running in The Magazine of Fantasy & Science Fiction. I’m also writing a serialized novelfor Lightspeed Magazine about a far-future hardboiled “confidential operative” in a space-opera setting who becomes a wizard’s henchman after the universe abruptly shifts its fundamental operating principle from rationality to magic. In other words, more crime stories disguised as science-fantasy.