Wasps at the Speed of Sound contest winner
Buy your favourite author a latte
When J.W. Schnarr presented us with a second collection of short horror stories we were more than intrigued, given his dark, eyes-wide-open collection Things Falling Apart, which we published in 2012.

This collection, A Quiet Place, marks a distinct development in Schnarr’s very aggressive style, yet demonstrates a growing subtlety into the psychological over the physical. We journey with him through the hazardous discovery of adolescent female sexuality, the imperatives of affordable labour, watch myth become reality, environments launching attacks, and the dark landscapes of minds battered into breaking. Eleven short stories make up this new collection, and will leave you anything but comfortable. 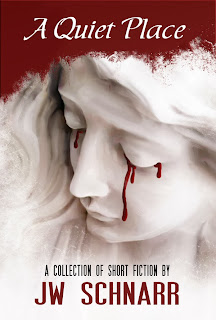 The brilliant and almost dream-like cover is again the result of the unfathomable mind of Jeff Minkevics, Five Rivers’ Art Director. He wanted to created a sense of the perils of spirituality, of delving too deeply to find that still, quiet place where sometimes peace transforms into suffering. We think he achieved that, and eloquently represented the tone of Schnarr’s newest collection.

JW Schnarr is an award-winning journalist originally from Calgary, Alberta. He is the author of the novel Alice & Dorothy and the former publisher of Canadian indie press Northern Frights Publishing. He is the editor/contributor of three anthologies, Shadows of the Emerald City, War of the Worlds: Frontlines, and Timelines: Stories Inspired by H.G. Wells’ The Time Machine. He is the author of two short story collections, Things Falling Apart and now A Quiet Place.

A member of SF Canada, he can be seen lurking in places such as Best New Zombie Tales Volume II (Books of the Dead Press) where Rue Morgue magazine dubbed his story “Freshest Tale” of the anthology. He’s also been spotted in Andromeda Spaceways Inflight Magazine and will be found in Slices of Flesh (Dark Moon Books) alongside the likes of Ramsey Campbell and Jack Ketchum. In 2012 he appeared alongside horror legend Clive Barker in Torn Realities (Post Mortem Press) with a story later reprinted in Imaginarium 2013: The Best Canadian Speculative Writing (Chizine).

By day he works as a reporter and photographer for the Claresholm Local Press in Claresholm, Alberta, where he makes his home with his awesome teenage daughter. The two of them often argue about who is going to do the dishes.