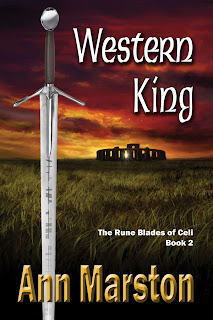 June 1, 2013 will see the re-release of Western King, Book 2: The Rune Blades of Celi, the second in Ann Marston’s much-beloved series.

As a special thank you to all Marston’s fans, we’re offering a special discounted price until June 1, 2013 for Western King.

The novel continues the saga of the people of Celi. The wanderer Red Kian has ruled Skai as Regent, but now it is time for him to step down. War clouds are gathering. Maedun sorcerers have taken the continent, and Saesnesi raiders are pillaging the islands.

But Kian has three sons. One is a prince of Skai blood, one is a wizard touched by Tyadda fire, and one is a dreamer who longs to unite the Celi against their enemies. Who will inherit the rune blade known as Kingmaker? Who will have the power to confront the Black Riders who bring darkness like a cloak to cover the land?

The answer will surprise you. Just as it surprises them.