LibraryThing review: Organic Home Garden
Author Michell Plested held hostage
We now have available review copies of 88 in either PDF or EPUB format. Please contact us with details of where your reviews will be posted, and we’ll be pleased to send you Michael R. Fletcher’s gripping, action-packed debut novel.
Five Rivers is also offering 45% discount on all advance orders for the trade paperback version. Instead of paying $32.99, you pay only $19.00, plus shipping. 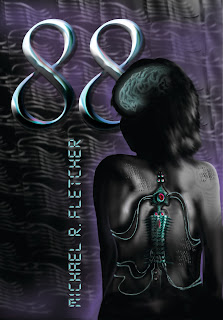 The dream of Artificial Intelligence is dead and the human mind is now the ultimate processing machine. Demand is high, but few are willing to sacrifice their lives to become computers. Black-market crèches, struggling to meet the ever-increasing demand, deal in the harvested brains of stolen children. But there is a digital snake in that fractally modelled garden; some brains make better computers than others.

88, a brilliant autistic girl, has been genetically engineered and raised from birth to serve one purpose: become a human computer. Plagued by memories of a mother she never knew and a desire for freedom she barely understands, she sets herself against those who would be her masters. Unfortunately for 88, the Cuntrera-Caruana Mafia clan have other plans for her.

Griffin Dickinson, a Special Investigator for the North American Trade Union, has been tasked with shutting down the black market crèches. Joined by Nadia, a state-sanctioned reporter and Abdul, the depressed ghost of a dead Marine inhabiting a combat chassis, Griffin is drawn deep into the shady underbelly of the brain trade. Every lead brings him one step closer to an age-old truth: corruption runs deep.

An army of dead children, brainwashed for loyalty and housed in state of the art military chassis, stand between Griffin and the answers he seeks. But one in particular, Archaeidae, a 14-year old Mafia assassin obsessed with Miyamoto Musashi, Sun Tzu, and Machiavelli, is truly worthy of fear. Archaeidae is the period at the end of a death sentence.