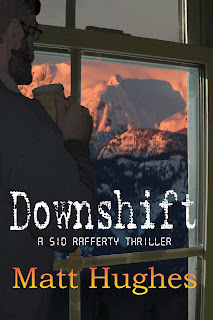 Last year we released a reprint of Matt Hughes’ page-turner thriller, Downshift, in both print and digital formats. It will very shortly be available as an audiobook through Iambik.

Sid Rafferty is the unwitting protagonist in Downshift, between writing jobs, a rock and a hard place, and the poles of his luck. At this point, he’s willing to take on just about any writing gig. But when a return to his political spin-doctor days collides with what should be a simple promo piece about a new ski resort in British Columbia’s playground, Sid finds himself out of his depth, over his head, in love and at risk of his life.

The entire story reads like a modern Humphrey Bogart heist set in British Columbia, Canada, and has consistently sat in the top 150 best-selling Men’s Adventure books at Kobo right from its release.

Matt Hughes has kindly put up the entire first chapter of Downshift on his website. We recommend you seize this opportunity to acquaint yourself with the crusty character of Sid Rafferty, especially in light of the fact late this year he’ll appear again in the sequel Old Growth, which Hughes tells us will be on Five Rivers’ editorial desk at the close of the month.