“Curious, if True”: The Fantastic in Literature 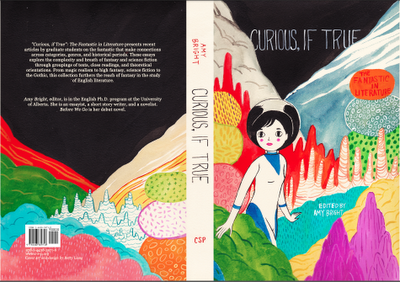 Following closely on the heels of the successful launch of her first novel, Before We Go, Five Rivers editor Amy Bright’s second book, an edited collection of essays on science fiction, fantasy and magic realism, is being launched this month (July, 2012). “Curious, if True”: The Fantastic in Literature, is coming out from Cambridge Scholars Publishers. Contributors include Luke R. J. Maynard, Gaelan Gilbert, Mary Eileen Wennekers, Elisa Bursten, Amy Bright, Max F. R. Olesen, Laura van Dyke, Erin Dunbar, Tessa Mellas, Shannon M. Minifie, and Thomas Stuart. The foreword is by another Five Rivers staff member — and long-time SF critic — Robert Runté. Cover art is by Betty Liang.
Amy is in the English Ph.D. program at the University of Alberta, specializing in YA literature, and reviews at Girl to the Rescue. Her academic work can be found in the Journal of Children’s Literature and Studies in Canadian Literature. Five Rivers sought Amy out for our editorial team because we wanted someone with her scholarship and critical eye, but also someone with recent experience as a successful new author: theory and practice.
02
Jul 2012
By Lorina StephensAmy BrightLeave a comment