Genesis of a cover

Virtual Event: Ahead of Our Time?
Apple, Kindle, Smashwords and The Docket

We thought we’d share some insight today on the genesis of a cover here at Five Rivers; that is, the process through which we take a design idea. In this instance the subject is Simon Rose’s upcoming YA novel, The Insistence of Memory.

The story is targeted for the 14 to 16 age group, an action-packed speculative fiction starting in present day Canada and ending up in the dark machinations of the Cold War Era between the US and Soviet Union.

Lots of kids have an imaginary friend. Max, our erstwhile hero, certainly did. Max’s imaginary friend was a little boy who liked all the things Max did, enjoyed the same games, and who even looked a little like him. Then one day, Max’s friend said something that scared him. Max never saw his friend again. Until years later, Max’s childhood friend returns, older, wiser and disturbingly real. He tells Max of events hidden for a quarter century, events that someone will go to deadly lengths to keep that way. Max discovers that he is the reincarnation of a boy called David who was murdered years before. To save David, Max must journey into his own previous life, not knowing how his actions will affect what he knows as reality. 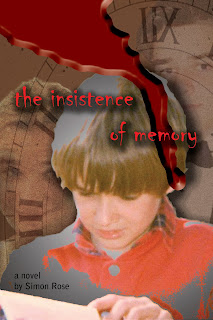 So, how to design a cover that would capture the essence of the story, tell its own visual tale? At first we went for the obvious, the concept of Max and David fading into and out of time. To the left is our first cover incarnation.
As it was, we decided the boy in the foreground is too youngm and even though the image is meant to represent Max as a young boy, with his whispering imaginary friend just behind him, it sent all the wrong signals. The cover gave the impression the subject of the novel is a young boy. Max, in the story, is in his graduating year of secondary school.
So, off for a re-think and reconceptualization. What if we were to eliminate the foreground character? So, a few more hours at the design screen, further tweaking, and we came up with the second incarnation, here at the right of the screen.
This cover came across a little more James Bond, a little edgier with the idea of appealing to those action loving male adolescents. We worked in an indigo background and a negative image of the reversed clock face to create a somewhat night sky feeling, which might create the impression of time travel, space, the beyond. The problem, however, became, once again, the foreground figure. 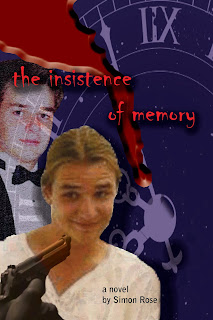 In this case the questions were manifold. Why was the character smiling? Few seemed to get that the smile was more a ‘What the …?’ expression. And the androgyny of the foreground figure became quite a contentious issue. It should be noted the foreground figure is in fact an adolescent male, most definitely an adolescent male. And the blood, well, that just met with thumbs down all around.
So, when a concept isn’t working, you need to pay attention to what the muse is telling you, ditch it, and search the ethos for a new inspiration. In the third and final version of the cover for The Insistence of Memory, we took our inspiration from Dali’s painting, The Persistence of Memory. Some of you will remember that famous image of melting clocks.
Because Simon Rose’s story deals with time travel, as well as reincarnation, it seemed appropriate to cultivate the concept of the malleability of time. And so here, at last, is the final and official new cover for Simon’s new young adult novel, The Insistence of Memory, slated for release in the spring of 2011. 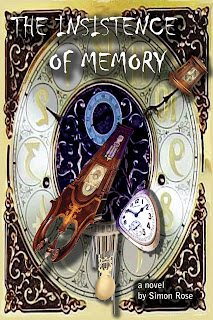 14
Apr 2010
By Lorina StephensBooks, Simon Rose, The Insistence of MemoryComments Off on Genesis of a cover