In our daily feed from Google Alerts, we discovered this favourable review of Deb Salisbury’s Elephant’s Breath & London Smoke, and thought we’d share it with you. 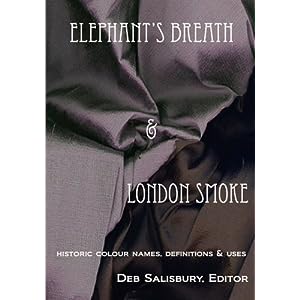 To begin with, this book is fun. Just skimming the pages leads you to treasures like “wine yellow”, “the pale and doubtful shade of claret known as wine-and-water”, and “clair de lune”, “A color that gives the effect of sheeny white, over pale blue.” If you want to browse 19th-century fashionable clothing colors, this book is absolutely perfect for you.

There are, however, some execution problems. The back cover promises to cover “from around 1380 to 1922” in “English, American, Canadian, and Australian publications.” In practice, however, few of the citations are to sources from the 1700s; most pre-19th-century citations are to 19th-century references to older works, including an 1845 modernized edition of Chaucer and Letters Received by the East India Company, 1897. There are no references to modern scholarship — one obvious omission is Janet Arnold’s magisterial Queen Elizabeth’s Wardrobe Unlock’d.. The author says frankly that “A great many of my sources were found on Google Books”, and the book reflects the limitations of what is currently digitized and in the public domain. (If you look at the bibliography, however, the author has clearly researched works that are not currently digitized.) Similarly, the references to early 20th-century sources are scant; the last one I spotted was to 1910, and there are only a few 20th-century books in the bibliography.

Almost all the citations are to fashion publications. If you want to know what architects, for instance, were saying about colors you’re out of luck. There are, however, some invaluable citations to a 1908 source, Modern Pigments and their Vehicles, and to an 1834 source, Practical Treatise on Dying, both of which give recipes for colors, useful for pinning down precisely what was intended by a particular name.

Although the book is in dictionary style, repeated references aren’t merged into a single header. Instead, you have eight definitions of “iron gray”, one after the other in a long line. Similarly, the entries for “dead leaf”, “feuille mort”, “filemot”, “foliomort”, “philomot” are cross-referenced but not merged. It’s enormously labor-intensive to do this sort of merging, so for a single individual not working under the aegis of an academic press, its absence is unsurprising.

There are some enjoyable longer paragraphs in the back under the title of “Period Comments on Colours” including “Victorian Complaints about 17th-Century Colour Names” and “Old and New Colours:1872”. There is also an invaluable bibliography. As a piece of scholarship, Elephant’s Breath & London Smoke is somewhat limited. As a laywoman’s (-man’s) reference to the fashionable clothing colors of the 19th century, it is invaluable. And, as mentioned in the opening paragraph, it is fun.