We miss you, Shakespeare!

Today is the 400th anniversary of the death of the Great Bard, William Shakespeare. Arguably the greatest writer to have ever lived, his work is as relevant and timeless today as it was in Elizabethan England. He wrote of love and betrayal, humour and tragedy, the caprice of social mores and political figures. 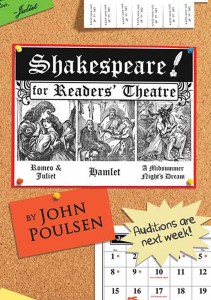 To give homage to that remarkable voice, Five Rivers is pleased to gift our readers with free eBooks for an entire week through Kobo, featuring John Poulsen’s brilliant redactions presented in Shakespeare for Readers’ Theatre: Hamlet, Romeo and Juliet, Midsummer Night’s Dream, and the screamingly hilarious modern vernacular presented in Aaron Kite’s Shakespeare for Slackers: Hamlet.

The second edition of Poulsen’s Readers’ Theatre series releases September 1, 2016, this one featuring Shakespeare’s greatest villains: The Merry Wives of Windsor; Othello, the Moor of Venice; Richard III; and King Lear. As in the first volume of the series, Poulsen presents several readers’ theatre versions, complete with directorial and background notes.