The second book in the Prime Ministers of Canada series releases December 1, 2016. Author Paula Johanson took time to discuss with publisher, Lorina Stephens, her work on the biography, her thoughts and insights.

LJS: The second book in the Prime Ministers of Canada series releases December 1, 2016, this one on our 15th Prime Minister, Pierre Elliot Trudeau. He has been called Canada’s greatest Prime Minister by some, and by others a dangerous man. After having researched his life, and written about him, what is your conclusion?

PJ: I can easily see why people would have either opinion about Pierre Trudeau. To me, he was someone who brought his best efforts to the challenge of being prime minister. He honestly tried to do what he thought was best for our country. He held strong opinions, and he was willing to learn, and he expected the best from his cabinet and the provincial premiers.

LJS: In your opinion, what was Pierre Elliot Trudeau’s greatest achievement?

PJ: Trudeau achieved astonishing changes for the confederation that is Canada. The idea that there could be a national plan for energy use, or national controls on prices and on federal employees’ wages, was earth-shattering for big players in our economy. But that these national actions could happen without permanent tyranny was equally significant. The idea that our Constitution should be independent of Britain was a powerful change that he worked to achieve before retiring, knowing no one else felt as responsible.

I think that government support for multiculturalism was possibly his greatest achievement. That, and his white-water canoeing skills. In his 70s, he was still stern paddler in canoes, and carried two packs on portage. It’s a safe bet that during his life he paddled more miles in a canoe than any other member of Parliament – and more miles than all the other prime ministers put together. No wonder he oversaw the creation of so many new national parks!

LJS: And his darkest moment, either politically or personally?

PJ: He had dark moments politically, to be sure. Losing an election was a blow, but he quoted the Desiderata at a press conference and vacated the prime minister’s residence and office immediately. Then he went on a long canoeing trip with friends, an experience that always cleared his head. Later, bringing the Constitution home to Canada was not easy but he rose to the challenge – and sired his only daughter while defending it.

His darkest moment was a personal one, without question. It was the death of his youngest son, Michel. Till that moment, Trudeau hadn’t truly been an old man, whatever the calendar said.

LJS: Were there surprises for you when you conducted your research for this biography?

PJ: There are always surprises when I do research in unexpected places! Maybe you’ve seen photos of Trudeau in his comfortable Cowichan sweater, a heavy-knit sweater he wore for over 40 years? It was replicated recently by Salish Fusion knitworks, as a surprise gift for his son Justin.

I was surprised to learn of Trudeau’s fascist beliefs as a young student, coached by teachers who believed in strong and confident governments controlling their citizens and who resented Anglophone dominance in Canada. At school, he wrote a play about Quebec fighting for independence from Confederation – set in the future, the same year that the Parti Quebecois would hold a referendum on that issue. But I already knew it was his graduate studies and his hitch-hiking travels that taught Trudeau to be a citizen of the world, a social democrat who believed in elected and responsible governments.

Trudeau isn’t the only prime minister I’m writing about for Five Rivers. I’ve spent much of the past two years researching the lives of several Canadian prime ministers – yes, on purpose! — as one of the writers for this series of biographies. Some of these prime ministers had lives that interconnected, like the four men who held office for brief terms after the death of Sir John A. Macdonald. Two of the four are considered the least successful prime ministers we’ve elected! Tupper was even condemned as a “boodle knight.”

Who can write about more recent leaders without mentioning the women in their cabinets and the one female prime minister we’ve had so far? These PMs are interconnected, too. I can’t take notes on Joe Clark as a Prime Minister without making some references to Pierre Trudeau, for instance. But while Trudeau had panache and presence that got him recognized in public during and after his years in office, Clark was so low-key as a Prime Minister that he went unrecognized even when showing ID to write a cheque in an Ottawa hardware store.

When you’re talking about the people, Canadian history is much more exciting than it seems in school textbooks. The biographies that we writers are making for Five Rivers tell the interesting stories about the Prime Ministers as people: Trudeau wearing a Rolex watch (well-repaired), King holding seances, or Tupper as a medical student who snuck into a graveyard one night to – well, that would be telling.

Our biographies won’t replace textbooks, but they put these people into context with historic events. The publisher isn’t trying to compete with Ginn and other large publishers of textbooks. Instead, Five Rivers is doing what small and medium-sized publishers do best, which is support individual voices speaking on issues of human interest.

Prime Ministers of Canada, Pierre Elliott Trudeau, 15th Prime Minister, will be available in both print and eBook, directly from Five Rivers, and online booksellers worldwide. 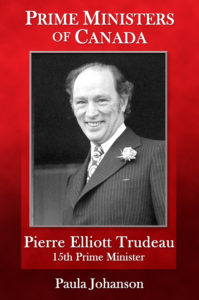