Leslie Gadallah, author of The Legend of Sarah, and the soon-to-be released Cat’s Pawn, speaks to publisher Lorina Stephens about her forthcoming novel, and her thoughts about SF and the writing process.

LG: At Rober Runté’s suggestion, the new version of Cat’s Pawn has a new prologue, written from Ambassador Talan’s point of view. It’s shorter, and gives more insight into Talan’s motives. It also makes the frame that holds the main story more symmetrical, and brings more drama to the final scenes. Some details of Orian society may have been lost, but that is more than compensated by the better understanding of an important character. The story has been updated to remove dated references; the original was written 30 years ago, and some of the things in it, like communications systems, have been overtaken by real life events. It was also written before the current conflict in the Middle East began, so if an endless, half-hidden, war of attrition seems familiar, though I am quite willing to don the prognosticator par exellance hat, it is, in truth, a coindicence. The writing has been cleaned and tightened, also under Robert’s guidance. He is good at keeping me on story when I’m inclined to take side roads. That being said, the main story hasn’t changed much.

But it has much, much nicer cover art, thanks to James Beveridge.

LJS: The story is one of interstellar political intrigue, and one can’t help but wonder if the work of Gene Roddenberry had any influence on your original work.

LG: I was a fan of the original Star Trek, less so of its offspring. And insofar as one strives to measure up to the things one finds good, Roddenberry has undoubtedly had an influence on my own writing. But he was not the first writer by any means to propose interplanetary politics of some sort, nor the last. It’s a handy device, though a very human way of thinking. Perhaps we will eventually find that other intelligences have discovered other ways of organizing themselves. Who knows? We are extrapolating from n=1.

I suspect that anyone involved in SF in modern times has been influenced by Roddenberry in one way or another. SF on TV back in the 60s wasn’t much to cheer about, a lot of big-hair bimbos in tin bras being attacked by bug-eyed aliens. (Though what the bug-eyed aliens wanted with the bimbos is hard to imagine. The genitalia of aliens (assuming they have some) and humans are likely to be less compatible than are the genitalia of humans and chrysanthemums. We share a couple of billion years of evolutionary history with chrysanthemums.)  Canadians didn’t get Red Dwarf and Hitchhiker’s Guide to the Galaxy, excellent British SF; we got Knight Rider and Alf. So in spite of pretty sad special effects—low budgets and the technology of the times—and plenty of jingoism and some seriously cheesy plots, Star Trek was exceptionally good for its time. The Devil in the Dark remains a memorable episode to me. Although the alien in that episode was rather poorly instantiated, it was written as an entity in its own right, with no interest in eating or breeding with humans, no designs on our tiny planet, no beef with our space navy. It was just going about its own business, pursuing its own agenda. Yeah!  That’s what an alien is mostly likely to be—just not that into us.

But did I set out to emulate Roddenberry? No. There are writers I like better; if I were going to imitate someone I would choose Gaiman, or Gibson, or maybe Clarke. Aim high.

LJS: Tell us about your inspiration for this story, and how it grew from inspiration to fully-realized novel.

LG: Well, it was 30 years ago, so it’s hard to remember exactly what set me off. I had been toying with the idea of serious writing for a while, entered a few contests, won some, lost some, but had not done much else about it. I do remember having read several novels of the SF kind and thinking that it would be nice to see a story about an ordinary person, who was not the forgotten son of a declining royal house in need of rescuing, nor the progeny of magicians, nor the one, undiscovered, extraordinary talent that happened to be exactly the thing needed to save the universe. There was one particularly bad example of all the things SF is accused of being when literary types are disparaging our genre which shall remain nameless but which I actually threw at a wall. I suppose every reader eventually comes to the book that prompts him to say, “I can do way better than that.”

One of the things our family was fond of doing while the kids were at home before work and school took them away, was to spend some time together after dinner arguing out the state of the world, Gedankenexperiments of a lesser kind,  and one of the places we often came to was the overpopulation of people on the planet. What can be done to solve this?  In Cat’s Pawn, I tried to explore a bunch of unsatisfactory answers—humans crowding themselves together into poorer and poorer conditions, the inhabitants of Beta Ellgarth and Turgorn prosecuting an endless war, the Roothians making it so expensive to have children only those who could amass wealth from off planet could afford to do it, the Kaz driven to constantly expand their empire, and of course, the Oriani and their terrible method of birth control. None of these things is really good, but something is necessary.

Another thing I wanted to do, totally ego driven, was see if I could make the last few words of the story change the tenor of all that went before. I feel I didn’t really succeed in this, though I did get an annoyed reader complaining that the Oriani were good guys all through the book and then turned nasty at the end, so maybe….

Given these ambitious writerly goals, if you take some regular Joe and put him in a weirdly nasty situation, what happens? I’m not the sort of writer that has everything planned out from the start. I just sort of go where the story takes me. It’s not efficient, but I have a feeling if I knew how it was going to work out, I’d get bored before the end.

LJS: Why use anthropomorphized races? Was it an attempt to illuminate humanity, or an author at play with concepts and possibilities?

LG: How can one get some sense of other? I’m a human. I think like human. To imagine alien societies, I have to try to find some way to think less like a human. The non-humans I am most familiar with are cats. There have been cats in my life all my life, and they don’t think the way people think. So can I put myself into a cat skin and try to see the world from that point of view? Or into a lizard skin, and see things from a cold-blooded perspective? What if I was a bug? What if I were something like nothing on Earth—can I even imagine what that might be like, never mind how it would think? Probably not very well. Extrapolating from n=1 again. We only know mammalian minds on Earth, and appreciate a very few of them. Though it is beginning to look like celphalopods like octopuses could be a second line of intelligence in our world, with a different type of brain. That would be exciting.

LJS: Where does the next novel in The Empire of Kaz series takes us?

LG: The next story about The Empire of the Kaz is Cat’s Gambit. It begins after the Kaz have overrun the Orian home world, and killed nearly all of the population. A few survivors have taken refuge on another planet, but discover that where once they feared breeding themselves to extinction, they now find they cannot breed at all. The only hope they have for their species is to take back their world, and one survivor sets out to do that with the help of some scraps of information from salvaged Oriani archives and renegades from two other Kazi occupied worlds, a few Lleveci warriors and a couple of human pirates. 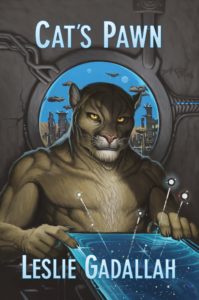 Pawn, by Leslie Gadallah, releases November 1, 2016 in both print and ebook, and will be available directly from Five Rivers, and online booksellers worldwide.