Susan MacGregor, author of The Tattooed Witch Trilogy, will be appearing at Owl’s Nest Books, Thursday, January 19, 6:30 to 9:30 PM. 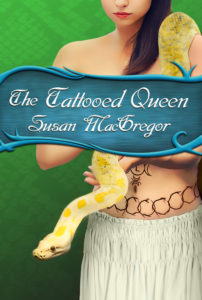 To celebrate the release of The Tattooed Queen, the last book in my Tattooed Witch trilogy, I’ll be heading to Calgary to launch it, with a reading or two at Owl’s Nest Books. Hoping to see as many of you Calgary and southern Alberta people as possible! Come on out and visit! It’ll be great to see you.

For those of you who haven’t read the first two books of the trilogy, think Spain 1550, gypsies, flamenco, gypsy tattoo magic and the Spanish Inquisition in relentless pursuit. Throw in a love triangle involving a young healer destined to lead her tribe, a vagabond thief, and a high priest ghost. Toss in enough of the actual history to make it real, and enough magic and psychic ability to make it a problem. Here’s the official synopsis for The Tattooed Queen.

In this last book of The Tattooed Witch trilogy, Miriam, Joachín, and Alonso finally reach the New World. Sick at heart because her husband, Joachín, is captive on a slave ship, Miriam finds her own crossing of the Great Ocean Sea, with its lack of privacy and vermin infested quarters, the least of her troubles. The crew suspect her and her tribe of witchcraft. Alonso, her ghostly love, does what he can to help, but at a growing, personal cost. As for Joachín, his situation improves little when his slave ship is taken by pirates off the coast of Afrik. Still in hot pursuit, Tomás, the Grand Inquisitor, hunts them all, sailing for Xaymaca (Jamaica) with his pet sorceress Rana, and a bokor, (a voodoo sorcerer) who takes their blood magic to a new, diabolical level. In this final book of the trilogy, the destinies of Miriam, Joachín, and Alonso are larger than any of them could have dreamed. They also learn a hard truth – the fulfilment of love and destiny is not without its sacrifice.

Promises to be a fun and entertaining event.