LJS: The re-release of the second book in your Empire of Kaz series launches April 1, 2017. The sequel takes up after the Orian have fled their overrun world, find themselves increasingly incapable of continuing as a species, and now face having to reclaim their homeworld with the support of only a ragged crew.

Without giving away too much, where do you take us on this section of the journey?

LG: In Cat’s Pawn, we had a human taken out of his comfort zone and saw him trying deal with an alien society. In Cat’s Gambit we take an Orian out of her comfort zone where provable facts and rational thought prevail and see her needing to cope with rumour and myth and things half-known, and try to make sense of it.  And she will, of course, try to make sense of it. She has to deal with other cultures somewhat on their own terms, and this does not come easily to her.

LJS: You spoke of changing the tenor of the previous novel by employing a twist in your conclusion. Are you jolting your reader in the same manner with Cat’s Gambit?

LG: Not so much this time. Though I did take a swipe at a couple of clichés I find annoying (Could our hero really jump into an alien spacecraft and just take off? My  cousin the pilot has to undergo extensive training every time he gets a new type of airplane), I think Cat’s Gambit has a much more traditional ending. There is a certain calm by the end of the story, for all we know that it isn’t going to last.

LJS: How does Ayyah’s role and character develop throughout the novel?

LG: All of the main characters in Cat’s Gambit are alienated to some degree, if we can use that word. Ayyah is the driver of the story. From the beginning, she feels like an outsider among her people. She finds herself deliberately violating the tenets of her culture and she is very uncomfortable about doing that. Her uneasiness leads her to rationalisation which fuels her determination, but also makes her less and less willing to listen to other points of view. This is her response to opposition; she has to prove to herself as well as to others that her actions are necessary. She becomes more rigid in her thinking as matters progress and more devious about getting her way, and that brings on disaster. 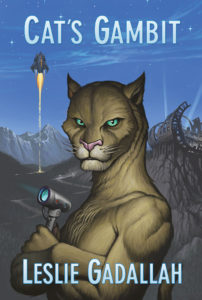 LJS: You speak of cost in this novel, cost of lives, integrity, hope, all very human experiences. I know you’ve been asked this before, but why do you think writers of speculative, science and fantasy fiction explore the human experience through alien eyes?

LG: To see ourselves as others see us!

It wad frae mony a blunder free us,

I think attempting an alien point of view is a way to distance ourselves, to look at our beliefs and given truths from a little distance. Many of the truths we hold to be self evident are not truths; the good guys don’t always win, we are all created different from one another (which has been our strength), one culture is not necessarily better than another, just more familiar.

The definition of good varies from place to place.

We cherish what we know, and it’s hard to step back and try to see ourselves with unprejudiced eyes. The Martian Observation Team must see much of the way we conduct ourselves as a species to be inexplicable. Why would we leave a million of our own kind suffering and starving against border fences yet expend time and resources rescuing stranded whales? Don’t get me wrong—I’m glad at least some of the whales got rescued and I know that many people have donated time and effort to help refugees, but overall, it must seem odd to an outsider that the greatest hazard to human life on earth is humans.

An alien can be the outsider to all of us, regardless of which society we embrace, which leader we follow, and what name we give our imaginary friend in the sky, thus pointing out how very much more we are alike than we are different.

LJS: And of course, the story of Oriani doesn’t end with Cat’s Gambit. There is more to come in the dramatic conclusion, Cat’s Game, which is scheduled for release July 1, 2018. Tell us where you’re taking us in this final novel. And is this the final novel of the series, or is there something else lurking in that inquisitive mind?

LG: In Cat’s Game, we find the Interplanetary Community showing some cracks, as is Orian society, and the Kaz are threatening once again. Ehreh, a microbiological engineer near the end of his life, thinks he has found a solution, but, opposed by most of his own people, cannot collect together enough support from fractured interests to put it into effect. Searching beyond his own world, he finds some help in unlikely places, but not all of it is trustworthy.

I think this will be the end of the story. But never say never. It’s always possible that something will come along.

Cat’s Gambit releases April 1, 2017, in both print and ebook, and is available for pre-order from Five Rivers and your favourite online bookseller.