A Creative Process, by Joe Mahoney

Home / Blog / A Time and Place / A Creative Process, by Joe Mahoney

In which Joe Mahoney reflects upon the creative process for his debut novel, A Time and a Place.

I wrote the first words of the novel that eventually became A Time and a Place in July 1988. I made the final correction to the manuscript about a week ago, in April 2017. So technically it took me almost 29 years to finish the novel.

I hasten to add, I haven’t been working on it all that time.

I wrote a few pages by hand in 1988, then put it aside until 1993, when I found those pages, decided they possessed a certain merit, and promptly wrote the first three chapters.

Then I made the classic beginner’s mistake of trying to get those first three chapters exactly right, revising them endlessly, never really making any progress, frequently distracted by other projects.

I realized that if I tackled the novel the same way, I could have the whole thing written in six months. So I did exactly that, refusing to revise even a single word until the first draft was complete. A mere three months later I had the entire first draft written, close to one hundred thousand words.

And then spent the next several years perfecting it.

Which was fine. I wasn’t in a rush. I’d written the story out to the end, so I knew where it was going, more or less. It was just a question of making the journey there as smooth and compelling as possible. The final draft bears little resemblance to that first draft, which was a map without any roads. It showed me where I needed to go and some of the forests, rivers, and mountains in the way, but I still had to hack, swim, and climb my way to get there.

The initial idea was simple: a young man messes with powerful forces beyond his control, frightening those closest to him. I originally envisioned it as a short story. When I discovered those first few pages five years after having written them, it wasn’t the idea that I found compelling, it was the tone—a certain tongue-in-cheek quality. Both the idea and the tone have matured considerably since then, but they’re still discernible in the finished product.

One of the reasons it took so long is that I didn’t have a whole lot of time to write. I had a day job and an active family life. Mostly I wrote on the Go Train commuting to work, but I trained myself to be able to write whenever and where-ever I could: art galleries, cafés, swimming pools, doctor’s offices, wherever I could steal a little time with my laptop.

While others sat on the Go Train completing their crosswords and Sudokos, I was consumed with my own gigantic puzzle, using pieces (sentences, paragraphs, chapters) that I’d fabricated myself out of words. Gradually the puzzle grew more complex, the plot and characters more compelling, to me at least. At night I would lie in bed mulling over this or that thorny knot that I’d inadvertently written into the story, trying to figure out how to untangle it. Then I would fall asleep and allow my subconscious to do the heavy lifting. Sometimes the answer would present itself the next day. More often than not it required a whole lot more contemplation and revision.

I was constrained by rules I’d imposed upon myself, some borrowed from writers like Elmore Leonard (Get Shorty), others from editors like Thomas McCormack (The Fiction Editor), and yet others from well-thumbed copies of Writer’s Digest. Never use a word other than said to carry dialog. Never use an adverb to modify the word said. The birds flew, not the birds were flying. Err on the side of conflict. Show don’t tell except when doing so would take all day. Avoid clichés. They’re not for everyone, these rules; not even me, necessarily. They were just guidelines for this particular novel. And I didn’t always follow them.

I drew inspiration from the works of others, most consciously from writers like Edmund Hamilton, Dr. Paul Linebarger (a.k.a. Cordwainer Smith), Roger Zelazny, and H.P. Lovecraft. There’s some Stephen R. Donaldson and William Browning Spencer in there, too. Friends helped. Over the years, I’ve read much of A Time and a Place aloud to members of the Saturday Night Scribes, an informal writing group I’ve been privileged to be a part of for many years. Without their enthusiasm for A Time and a Place, I would not have finished it. Friends and family have read bits and pieces of various drafts, sometimes yielding useful feedback, but mostly it was their encouragement that I cherished.

When I finished writing A Time and a Place, or, more accurately, when I thought that it was done, that there wasn’t a single change left to make—that it was, in other words, perfect and unassailable—two skilled and caring editors dissected it with surgical precision. Arleane Ralph and Dr. Robert Runtè astonished me with their discoveries. Flaws blindingly obvious when they pointed them out: logical inconsistencies, grammatical errors, confusing passages, or worse, boring passages, and other ghastly errors too numerous to mention.

This feedback did not bother me at all. I welcomed it, as it was all about making the novel better. I challenged some of the suggestions, but implemented most of them, ultimately rewriting two and a half chapters. 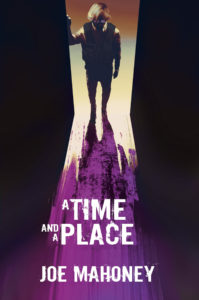 So you can see, A Time and a Place was not exactly dashed off. It was about as easy as threading a wrought iron chain in one ear and out the other. Still, writing it was usually my favourite part of any day. Probably it took me so long to finish because I loved writing it so much. Had I not finally received a deadline, I’d be tweaking it still.

Whether all that time and effort has resulted in a novel worth reading remains to be seen.

A Time and a Place releases October 1, 2017 in both print and eBook, available directly from Five Rivers and your favourite online bookseller.

A Time and a PlaceInterviewJoe MahoneyNew Releases
10
May 2017
By Lorina StephensA Time and Place, Joe Mahoney1 Comment