A decade of publishing

It is amazing to me it’s been a decade since I published that first book, which was more about dipping my toes back into publishing waters than with a concept that 10 years on I would see Five Rivers Publishing having released over 70 titles.

Over the next months I thought I’d share some of that journey with our readers and followers.

So, how did it come to be that Five Rivers Publishing should exist?

It started with a chapbook of poetry

Back in the mid-’80s I came to be acquainted with a remarkable poet, Vaughan Harris, who made his way in the world as a cabinetmaker. Vaughan’s skill was in restoring early Canadian pieces, working with butternut and maple, oak and cherry, lovingly restoring and repairing cabinets from early European settlement in Canada, pieces either made here, or brought from Europe during those arduous immigrations. He was a quiet, thoughtful man who, when not absorbed in restoration, scribbled out journals full of stunning poetry. There were cadences and rhythms of words that caught the sense of a weary footfall, a sigh in the fog, an ache of the heart.

I met Vaughan through a creative writing class I was taking with former CBC journalist, writer, and delightful curmudgeon, Allan Anderson. The group wanted to publish a collection of their stories and poetry, and I, having published two modest chapbooks of my own poetry (mere photocopied leaflets for which I’d registered ISBNs under the publishing house of Keystone Press), volunteered to undertake the project. We published two collections called Creative Mosaic.

I remember well typing out the layout on what was then my state-of-the-art typewriter (a gift from my dear husband who supported my writing career), and doing a literal cut and paste mockup which we then photocopied. Humble stories, humbly presented, but very much with voice and integrity.

Vaughan was impressed enough with the product he discussed with me the possibility of publishing a chapbook of his poetry. We did just that. This time I employed a printer in the village of Tottenham where Vaughan lived. It was a beautiful little publication entitled: The Cabinetmaker’s Art. I printed 300 copies. We sold about 50, left on consignment about another 100 in various bookstores and curiosity shops. I was never paid for any of those consignments although the books had somehow disappeared. In short I lost my shirt. Life and distance intervened. Vaughan and I lost touch. Keystone Press quietly closed. I continued to hammer out my own fiction, and in the meantime built a modest career as a freelance journalist, writing for local, regional and national media. And in the meantime hammered out a fantasy trilogy, two SF novels, three children’s stories, and an historical novel.

And then the recession of the ’90s occurred. That meant severe hardship for my wee family. And an end, albeit temporary, to my writing career. It becomes difficult to justify the expense of paper, ribbon and postage when trying to keep a roof over your family’s head, and food on the table.

A move and changing technology 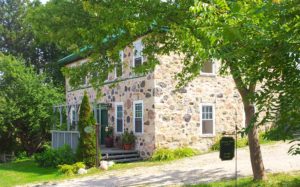 Then the new millennium. Nothing broke. The world went on. And for Gary and me life improved. The economy kicked up again. Our wee family had grown up and flown. And so Gary and I began looking for a new home, a new life, an escape from Orangeville and its growing hustle and hype. We longed for a return to more bucolic surroundings. The internet was opening up around then to all kinds of possibilities, information flowing, and after a year scouring housing listings online, we ended up, after two stutters, packing ourselves off in 2001 to the forgotten village of Neustadt where we’d found an old Georgian-Loyalist style, 2 1/2 story stone house, built sometime around 1874. Well colour us dizzy with joy. We could pick up where we’d left off before having kids, up to our elbows in a renovation project.

It was such a large renovation project Gary’s mum called and begged us not to buy the house.

But we did. And it’s been a joy and adventure ever since.

The move to Neustadt seemed to coincide with so many events, one of which was the changing face of publishing. Technologies in print on demand had greatly improved, to the point it was then possible for small entrepreneurs, like me, to once again wade into the pool of publishing. And in 2008 that’s exactly what I did. 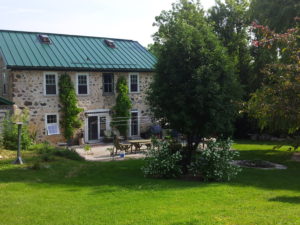 And the Angels Sang—that was the first book I published under the new publishing house, Five Rivers Publishing. Why publish a collection of my own short stories? Partly ego, I’m willing to admit, but also because I felt it was safer to experiment with my own work, than someone else’s, thereby minimizing risk and disappointment for an author who had faith in my ability to bring their work to print. One thing to disappoint myself. Quite another to disappoint someone else. The collection, by the way, will be getting a whole new cover this year by way of celebration, this time by Five Rivers’ mad genius, Jeff Minkevics. 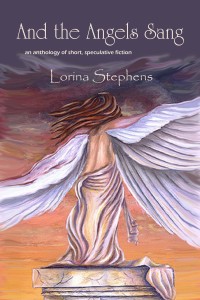 Shortly after that an acquaintance of mine asked if I’d publish her dictionary of historic colour names and properties. Oh sure, why not? The new publishing model with which I was experimenting allowed for risk at little cost, and Elephant’s Breath and London Fog was exactly the kind of quirky book I hoped to give an audience. Believe it or not the book sold quite well.

And after that it was Paul Lima and his book, How to Write a Non-fiction Book in 60 Days. Which led to an introduction to Nate Hendley and revitalization of his out-of-print books on Al Capone, Dutch Schultz, and John Lennon.

Things after that just seemed to snowball. There was one year we published something like 14 titles. That was the year I broke Jeff Minkevics. He’s still recovering from that. I understand therapy is going quite well. I periodically send him hot sauce just to add interest to his days.

From those early days to today, our team has grown. At first it was just me: editor, layout artist, cover artist, marketing master, website wonder, CEO and CFO. Gary just sort of watched me do a very good interpretation of a dervish.

In 2012 I was joined by Robert Runté who came to Five Rivers as senior editor. In that same year Jeff Minkevics came aboard as artistic director, and in 2016 I was pleased to have the services of Eric Desmarais as layout artist.

Today our editorial team includes five other excellent editors, besides myself, with four other artists upon whom we call for covers, and now a growing cast of narrators for our audiobooks which at the moment encompasses six very skilled individuals.

You have no idea how often I’m asked that. The answer is a convoluted one, so bear with me.

Back during that dark recession, Gary and I discovered historical reenactment. It was a relatively inexpensive way for the two of us to release an explosion of creative energy, and a way for us to bring some meaningful entertainment into our lives. It was during that time Gary decided he could make us a wooden bucket. Sure. Why not? And he did. That first bucket made a better colander than a watertight vessel. But he researched and fiddled and fixed that bucket. Now over 30 years later it still holds water without having used any glues or sealants. Yep, that’s my Gary, the cooper, and yes we’re both aware of the play on names.

Well, that bucket led to a small business in cooperage. And I sold historical sewing patterns. So what to call a business that encompassed all those things? Sutler? No, because sutlers were often attached to the military. Chandler? No, because that usually was associated with navy, or, you know, candles from where the name originally hailed. Commissary? No, that’s food. But Chapmanry, now that was a name without association to any military or negative connotation.

And where we lived in Orangeville was the headwaters of five rivers. So, Five Rivers Chapmanry.

That ended up being the umbrella company for not only the historical enterprise we both ran, but what paid the daily expenses, Gary’s glass business, and eventually the publishing house.

Later, when we moved to Neustadt, we were delighted to discover the area is also the home of five major rivers, so Five Rivers would still be appropriate.

The publishing house, however, morphed from Five Rivers Chapmanry, to Five Rivers Publishing, around 2013 in order not to confuse people.

And I’ve always loved the idea of using rivers as a metaphor for the flow of words and ideas, the sharing of information and stories.

Over the past decade we’ve had seven books shortlisted or the recipients of literary awards. Personally, I feel there are a lot of other books in our catalogue which are deserving of recognition. That’s not sour grapes at all. Just a recognition that it’s a tougher road if you’re a small press, with limited means, publishing unknown authors. I wouldn’t change a single thing about that, other than to aspire to greater efforts to get our authors and their stories the attention they so very much deserve.

We have a special page on the website for those books. You should take a moment and check them out.

Who knows? Modest dreams. I very much will continue to embrace publishing Canadian stories by Canadian authors. I think we as a nation have a rich and diverse culture worth sharing with the world. While I’ve chosen to slow down our publishing schedule, partly to ensure I don’t break any of our staff again, let alone myself, I’ve chosen to expand into audiobooks in order to bring the wonderful stories we publish to a wider audience.

This year we have some great books coming out:

One Velvet Glove, by Dave Duncan

The Boy on the Bicycle: A Forgotten Case of Wrongful Conviction in Toronto, by Nate Hendley

I would love to publish more history and historical novels; books by First Nations, particularly youth; books about experimental archaeology and historical pathways, so keep all of that in mind when submitting over the course of this benchmark year.

If you’re a reader, and you’ve read and loved any of our books, talk about it, post about it, write reviews and broadcast it. Your patronage and faith are treasured.

And over the coming months you’ll see our blog fill with not only the books that are coming out, the fabulous covers, the audiobook releases, but what I hope will be engaging articles about why I’ve chosen to publish some of the books, and authors, on our list.

So, until next time, happy reading, and help Five Rivers celebrate our 10th anniversary.