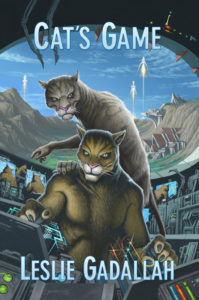 There is a storm coming

The Kazi Empire may have been beaten back temporarily, but is inexorably returning to the offensive. Ehreh leads a small group of Oriani scientists developing a new weapon to defeat the Kazi once and for all—if only he can get anyone to listen.

How is an elderly academic supposed to navigate the politics, rivalries, and special interests that dominate the Strategic Conference that decides these things? How can he tell friend from foe when half the representatives he meets are actually spying for someone else? How can Eheh convince a multitude of alien races to collaborate, when even many of his of own people oppose the plan?

And so it falls to Lauren Fox, an ordinary human in the wrong place at the wrong time, to come up with a workable plan to implement Eheh’s final solution.

Cat’s Game is available directly through Five Rivers, and your favourite online booksellers. The trilogy makes for great gift-giving this coming festive season.