One of the most powerful and essential skills in your writing arsenal is the ability to develop and write believable characters who step off the page into the minds of your readers. But it would seem it’s also one of the hardest skills to effectively master. Do it well, and you haunt the thoughts of your readers. Do it wrong, and your reader closes the novel, likely never to return either to that novel or any other written by you. Good character development drives plot, action, environment and mood. Good character development is of profound import.

Who is this person?

In my opinion, the only way you can write a believable character is to know that character, and that starts with a detailed character sketch, and that works back to the third installment of this series: Outlining.

While creating a character sketch isn’t necessarily part of creating your outline, in my experience it runs in tandem, because as you’re evolving your story, you’re also discovering more about who your main character, and even subsidiary characters, are. There are no ultimate methods of creating those character sketches. What I’ll present here are some methods I’ve found work for me. Adopt or adapt as suits your needs.

The genesis of all my novels always involves a main character as one of the main ingredients. At first I have just a nebulous understanding of who this person is. As I develop my outline, and write, I come to better understand who this person is, and that’s when I sit down and develop a character outline. It often becomes quite detailed, with extraneous information which will never make it into the novel, but it does inform how I present that character, why they do what they do, how they feel, their raison d’etre, if you will. I list things such as:

From those essential details develop others which allow me to fully understand who is this person. If I understand them intimately, am able to have an informed conversation with them, then at that point I know my reader will believe that character to be real as well.

How to convey that character to your reader

Too often I’ve read a manuscript in which the opening paragraphs describe how their main character looks and feels. That method, in my view, immediately sets up a cool distance between me and the character, because I’m aware of the writer, not the character and their world. The writer is telling me what’s going on. The character isn’t.

I’ve also, to my dismay, come across too many instances in which the character has been completely eliminated from any environmental description, thereby effectively diminishing the importance of character. It’s character which drives your story, or should be if you want to fully engage your reader.

Allow me to use an example I created in an earlier post about submissions.

In the post I used a well-known clumsy opening statement:

It was a dark and stormy night.

Which I suggested could become:

She stood there shivering, rain sheeting down her face, wondering not for the first time what she was doing out on such a night, in such a storm, with the wind howling like her own thoughts.

Now the weather is part of the character. There’s tension because she’s shivering. Is it from cold? Is it from fear? Perhaps fear because we are then given the clue she’s distressed as indicated by the phrase: howling like her own thoughts.

Or take a look at this example:

She was tall, dressed in green taffeta that rustled against her petticoats and hoop, her long hair pulled into a crown of dark, chestnut curls. There were pearls at her throat. She unfolded her fan and said in a husky voice to the gallant approaching her, “My dance card is full, but I could make an exception for you.”

This is all kinds of wrong, yet we see this sort of writing so often in many period romances which flood the market. It’s consumable, forgettable, and could definitely be better. If this story is being told from this antebellum femme fatale’s point of view, the third person observations are out of character. Certainly the gallant approaching her might observe these physical details, but it is unlikely she would. Better not to describe any of this, allow your reader to fill in the gaps in this case, because the fact she’s tall and speaks in a husky voice are all irrelevant, extraneous points which do nothing to develop her character. Instead, it might be better written thus:

When she saw him approaching, she knew immediately he’d observed the quality of her green taffeta gown, the expanse of its skirts. She’d chosen her attire carefully, knowing she’d have to be the perfect bait tonight. Everything depended on it. And to secure this traitor’s attention, she offered another enticement when she pre-empted any introduction by saying, “My dance card is full, but I could make an exception for you.”

Now the narrative is entirely in her head, a very tight character point of view, which develops clearly and with interest who and what she is. I chose to eliminate any description of her hair, because it’s not germane to the action or her point of view. We know she’s involved in some sort of subterfuge or scheme, and that further develops her character because it raises the question: is she a spy, or a Scarlett O’Hara on the hunt for a husband? We know she’s an assertive person, willing to take chances, because she’s just breached etiquette, and we know this without being told. We know this because it’s just part of the action. We haven’t been told by the writer intruding upon the narrative. 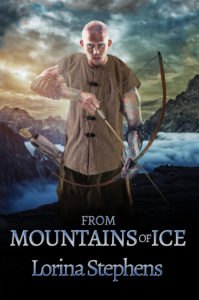 Allow me to dissect for you a passage from my novel, From Mountains of Ice.

The porter at the gate of Portelli’s home, once Sylvio’s, immediately admitted his former employer, bowing, uttering greetings. The man rushed before Sylvio, letting fly commands to servants as he passed to have Sylvio taken to the Sindaco’s study, to have refreshment brought. With as much grace as he could muster Sylvio followed the servant he was handed off to, trying to alleviate the discomfort he knew these people felt on the rare occasion he entered his confiscated, reallocated, ancestral home.

What do we infer from this short passage? We are told Sylvio enters Portelli’s home, which was once Sylvio’s. We are shown how the porter reacts in a fashion of deference to Sylvio. And we are given a revelation into Sylvio’s character in the fact he’s mustering grace, feeling uncomfortable with the attention and respect he’s being shown. That may indicate a humble person, someone self-effacing, and also someone who takes into consideration the feelings of those around him because of the fact he does attempt to muster grace instead of feeling this attention was his due and therefore the servant beneath his consideration or care.

That can be difficult and uncomfortable for some writers, because it means you allow yourself to open up and let your own emotions, feelings, and responses flow out into the story. It creates a certain vulnerability at times. But it also allows you to write characters who are true, and real, and believable. So, if you’re writing a tense scene, get inside your character’s head so deeply that you feel your heart skipping. If it’s a tragic scene, allow yourself to cry. If it’s a moment of halcyon, allow yourself to slide into the beatitude of the environment your character is experiencing, and then let those feelings, imaginings, flow out from your mind into the mind of your character, and from there into your scene. There is truth in this process. There is believability. And in doing so you will have built upon the development of a character who will be memorable, someone your reader will want to know, and will think about long after the last page has been read.