The When Worlds Collide Festival in Calgary this past weekend was a unqualified success. The consensus of those attending was that it was the best SF convention since Context’91. I highly recommend the convention to any writer, editor, or publisher who can make it next year. (The pilot convention this year focused on SF and some Romance writing, but will be expanded to include all genre’s next year.) It is starting to shape up as the best Canadian venue to network with fellow genre authors, editors and small press publishers.

As a senior editor at Five River Books, I was asked to participated on two panels, a blue pencil cafe, and hold a public pitch session. [I also did three author readings — two related to the Tesseracts 15 book launch, and one (with Alberta poet Bob Stallworthy) an excerpt from my upcoming novel.] 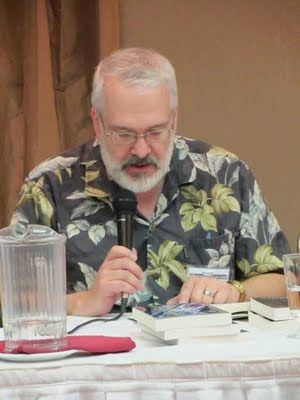 As a working convention, it paid off in spades: I spent an evening working with Michell Plested on his book, the equivalent of a month’s worth of back and forth emails compressed into a single working dinner; I worked out tentative deals with two other authors, and made the initial approach to several others as possibilities; listened to novel pitches from a half dozen authors at the public pitch session and encouraged one of them to email a full submission. (A couple of the others were promising, but not subgenres in which Five River’s would be interested; hopefully I was able to provide useful feedback on how to refine their pitches when approaching other publishers). I attended a half dozen readings, most notably those by Susan Forest, Susan MacGregor, and Bob Stallworthy, any of which were worth the price of admission alone; there were a half dozen book launches; dozens of interesting panels (see program) and workshops; and an unparalleled networking opportunity.

If this year’s event was any indication, I highly recommend next year’s WWC Festival to any writers (or serious minded readers) as a great venue to meet/do deals with editors and publishers, to find out what is happening in the field, and to take in some great workshops/panels etc.

15
Aug 2011
By Lorina Stephensconventions, RunteComments Off on Runté at When Words Collide Fesitval, Calgary