Five Rivers’ publisher and editor, Lorina Stephens, had a wee chat with author, Ann Marston, regarding her newest novel, A Still and Bitter Grave, which is a paranormal historical novel set in late 20th century Alberta. Aviation fans will be delighted with its detail, while lovers of suspense will be chewing on their nails.

LJS: December 1, 2016, A Still and Bitter Grave releases. This is your first new novel in 16 years, and a departure: no magic, no swords, no fantasy world—not at all what lovers of the Rune Blades of Celi series might expect. Tell us about a bit about the story, and what was the impetus.

AM: I can’t remember a time when I wasn’t fascinated and in love with airplanes. My father was a pilot who flew with the RAF during the war, and then came to Canada with his Canadian wife to work with the NATO training plan. When he retired from the RAF, he continued to fly. I can’t remember my first flight in a small airplane, but I can remember being coached in keeping the wings level when I was barely tall enough to see over the glareshield of a Piper Pacer. My grandfather was also a pilot. He flew SE5-A’s and Sopwith Camels in France from 1915 until he was wounded and grounded in 1917. I taught my daughter how to fly. I like to joke that it was the first time in her life she actually listened to me. When I started writing seriously, I first wrote stories with aviation backgrounds before I fell hopelessly in love with fantasy. I didn’t consider any of those early works worthy of publication, but I learned a lot writing them. When I decided to write fantasy, the first book I produced was Kingmaker’s Sword, and went on from there.

I wanted to return to my roots, I guess. A Still and Bitter Grave reflects this desire, I think. Most of the other stories swirling around in my head now are also aviation related, some with a slight paranormal or fantasy element, some not.

LJS: Why the silence from the voice of Ann Marston these many years?

Unfortunately, the answer to this one isn’t very pretty. Chalk it up to plain, old fashioned clinical depression brought on by some painful personal reversals and health problems, including a battle with breast cancer. Medication works to even out things, but it tends to murder creativity. Things became better very quickly once I managed to get the major stressors out of my life, and I think I’m back on track now, albeit a bit slower than I was before.

LJS: Was A Still and Bitter Grave a shelved story to which you returned, or something which developed during your recent renaissance?

AM: The first glimmers of A Still and Bitter Grave came to me while I was still working as a duty manager at the Edmonton Municipal Airport. I was fascinated by the old photographs in the Air Harbour Restaurant and lounge, and I was thinking “What if.… What if someone could still see this old stuff?” The solution to the mystery came to me long before the mystery itself. I made a lot of notes at the time, but I didn’t really have a main character yet. Several years later, I wrote a first draft, but wasn’t very happy with it, so I put it aside and went on with other projects. Only after the “Muni” was closed did I return to the story and revise and rewrite that rocky first draft with new ideas and a new character that had been running through my mind. I had to set the story in the recent past because the airport was closed to commercial traffic in 1996, then closed permanently in 2013.

I have to admit that I may have been influenced in the construction of the story by my love of Nevil Shute’s books. He wrote several where someone (almost always a pilot) either relived someone else’s life or relived a previous existence of his own, An Old Captivity, In the Wet, Beyond the Black Stump, The Rainbow and the Rose, to name a few of them. I liked the idea, but wanted to put my own stamp on it.

LJS: Plainly your experience as a pilot underpinned the plot and detail in the story. Were there ever times you had to tell yourself to add in detail you would ordinarily take for granted as a pilot?

AM: Most of the time, it’s the other way around. I tend to get carried away with “aviation-speak” and have to translate it into plain English for my non-pilot readers. This can be a bit tricky, actually. I don’t want to tone it down to the point where, to a member of the aviation community, it sounds too simplified, nor do I want to lose the non-aviation people. There are a lot of people out there who are not pilots but just love aviation-related material. These people are incredibly knowledgeable. An author can’t “talk down” to them—not and survive! I hope I’ve struck the right balance in A Still and Bitter Grave.

LJS: There are some scenes in the story describing a flight path, the airscape, the remarkable geography of Canada’s western mountains and northern landscape. Are these scenes lifted from your own experiences? 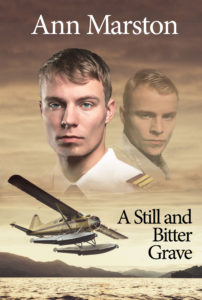 AM: I have several times flown back and forth between Edmonton and Vancouver using several routes through the mountains. I used to own a 1946 Stinson myself, a beautiful airplane, which I gave to Colin Fraser in the book. The route he flew through the mountains from Vancouver to Edmonton is my favourite one. Low enough to still have a lot of performance left in the aircraft if you need it, and, as I said in the book, with an airport every 65 km or so (approximately 40 miles) in case the weather comes down, which it’s wont to do in the mountains at times. I also flew the northern route several times, but in a Twin Otter, not a Beaver. Juniper Lake and the town of Juniper Ridge are complete figments of my imagination, of course, but the landscape around them is real. The Caribou Mountains are mostly tall hills, compared to the Rockies, but there are rocks and trees and lakeS everywhere. It’s pretty rugged country, with some of the hills reaching well over 750 metres above the surrounding terrain—more than enough to trip up an unwary pilot.

LJS: You deal with the paranormal in this novel by way of a deceased parent with unfinished business. Is that something you think happens—unfinished business suspends the journey of the dead? Or is dead simply dead, and this was a nifty hook on which to hang your story?

AM The jury is still out on the journey of the soul as far as I’m concerned. I’ve done a lot of reading on eastern religions and the transmigration of the soul. I like how it sounds. But I also like the old Celtic belief of coming back until you learn the things you needed to learn in order to reach the next level. I have never had any personal experience with anything that could be construed as a ghost or a returned spirit, but I’m not ready to dismiss the possibility entirely. Both my English grandmother and my mother believed in the concept of “old souls.” I’ve met many people who could qualify for that epithet, as well as some who are most definitely raw, new souls. Is dead merely dead, and this just a nifty hook to hang the story from? Well…maybe. But then again, maybe not.

LJS: It is said art reflects life. It could also be said you explore the themes of kin and kith, of place and purpose in your novels. How would you respond to that observation?

AM: That’s a tricky question. When I write, I like working out relationships between people and the world around them, and the bonds set by family and friendship. I feel it makes both the characters and the settings come alive. I want the reader to be able to see the characters in their own world, and how the place influences the people and vice versa. As for purpose, if a character doesn’t have a strong sense of purpose, or isn’t driven to accomplish something, there’s not much of a story to tell. I know it’s said that “theme” is something other people decide about your book long after you’ve written it. When you get right down to it, all I want to do is tell a good story that readers will enjoy. When I’m immersed in the writing, I really don’t think much about theme—just story.

LJS: What’s next from Ann Marston?

AM: After Diamonds in Black Sand comes out early next year, I think I might be pretty much done with straight fantasy, except for a short novel set in the same universe as my six fantasy novels. That one is proving tricky as every time I try to sort it out, it seems to morph into something else. (Don’t you purely hate it when your character and/or plot won’t do what you want them to?) And oh, yeah, another fantasy based on an idea of what might happen if First Nations had met the Roman Empire. And… Okay, maybe I’m not really done with fantasy. Maybe I just need a bit of a breather.

One of the books I want to write is an aviation-related time travel novel, set in the middle sixties in Canada’s far north. I’m having a great time researching this story. Another story I want to write follows the crew of a downed aircraft and the civilian search teams of Civil Air Search and Rescue Association (CASARA).

Once I get this move all sorted out and the new house whipped into the shape I want it, I’ll be writing more again. We’ll see what happens next. Half the fun of storytelling is “So, what happens next?”

A Still and Bitter Grave releases December 1, 2016 in both print and eBook, and is available for pre-order directly from Five Rivers and online booksellers worldwide. Both Ann Marston and Susan MacGregor appear at Audrey’s Books December 7, 7:00 PM.