Another stop on the blog tour
A Halloween teaser for you

I am very pleased to host author Nathan Elberg today.

The Cloth of Truth
By Nathan Elberg

My father Yehuda Elberg was a Yiddish literary star, writing short stories, novels, lecturing in Argentina, Venezuela, the former Soviet Union and more. He was twice a Scholar-in-Residence at Oxford University. Nobel laureate Eli Wiesel declared my father was “the novelist of the Warsaw Ghetto,” whose book “Ship of the Hunted” was “…cut from the cloth of truth- of creative truth.”

My father was a member of the Jewish Underground during the Holocaust. He was captured three times by the Nazis, saw friends brutally murdered and lost most of his family. Yet he retained a keen sense of optimism, and a drive to rebuild both his family and his people after the war.

I’ve inherited some of my father’s ability to put words together into a story. I’ve also inherited some of his experiences as I listened to his descriptions, read his books and lectures. But thankfully, my life has been much less eventful than his. Most of the interesting things I’ve been involved in have been by choice, rather than the result of some life-or-death situation.

Although it was exciting, marching in protest on the Pentagon is not the same as Nazi storm troopers coming down your street wanting to kill you and all of your people. Isolating myself in an apartment with a big screen TV and high-speed internet is not the same as hiding inside a wall for a year, where making the wrong noise could cost your life and the life of your family.

But still, when I write fiction I want it to be “…cut from the cloth of truth- of creative truth.” I want it to be exciting. Perhaps I’m greedy, but I also want it to have social relevance, that it can get the reader to consider some relevant truth or issue. So, for example, as an anthropologist I knew about transgender shamanism. It’s nothing like the phenomenon in contemporary popular culture. It’s nothing like the ‘woke’ depiction I came across in a novel by one of my favorite authors (I stopped reading it). The transgender shaman in Quantum Cannibals is a complex, conflicted, frightening person, reflecting indigenous shamanism rather than contemporary western values (I introduce him in this blog post). My character is an explanation, rather than a lecture.

The novel The Red Badge of Courage is known for its realistic depictions of the Civil War, even though the author Stephen Crane was born after it ended. Hans Ruesch never met an Inuk (Eskimo) in his life, but his novel Top of The World is considered an accurate depiction of Inuit life and culture. These writers didn’t experience the lives or events they portrayed. They didn’t have access to Google. Nonetheless, their portrayals were accurate. Their stories were moving.

It’s possible to write fiction, even speculative fiction, that’s “…cut from the cloth of truth- of creative truth,” even if you didn’t personally participate in the event, aren’t from that culture, didn’t live in that era. (This is especially important for speculative fiction). What’s required though is a commitment to truth, where characters respond according to the dictates of a consistent time and culture, even when that culture is a product of your imagination.

Who is Nathan Elberg

Nathan Elberg has lived most of his life in Montreal, Canada.  Following his graduation from McGill University, Honours degree in Anthropology, he conducted research on behalf of the Indians of Quebec Association, and several Departments of the Government of Canada.  He obtained a Master’s Degree in Anthropology from the New School for Social Research, where he studied with Dr. Edmund Carpenter, one of the prime movers of the Toronto School of Communication Theory (along with Harold Innis and Marshal McLuhan).  Elberg’s Supervisor was Prof. Michael Harner, who specialized in shamanic studies and cannibalism.  Following graduation, Elberg worked as Research Director for the Labrador Inuit Association.

Elberg spent considerable time living with Cree Indians and Inuit.  He passed a winter hunting, trapping and fishing deep in the boreal forest.  He’s eaten everything from porcupine to walrus to beluga whale, which perhaps influenced him to eventually adopt a kosher diet.

As he raised a family he switched from anthropology to real estate, working as a commercial broker.  He has three children, four grandchildren, and has been with his wife since nineteen seventy-four.

Elberg published his first short stories in Strobe Magazine while an undergraduate.  His writing took a hiatus till 2002, following which several religious essays were published.  His resumed writing fiction in 2010, when he began conceived the novel which eventually became Quantum Cannibals.  publishing short stories both online and in print.  Most are under his own name; some are under a nom-de-plum.

Elberg is Chairman of the International Board of Directors of a think tank, the Canadian Institute for Jewish Research, and has co-edited its publication on Aboriginal Zionism.  He retired as a broker in 2018, and since then has devoted his energy to writing, research, and of course, social media. 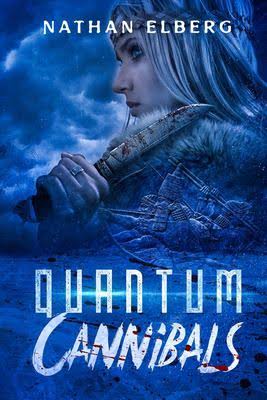 Elberg’s novel Quantum Cannibals was first published in November 2018.  A second edition came out in August 2020.  It is genre-bending, character-driven literary speculative fiction that- like Mitchell’s Cloud Atlas or Huxley’s Eyeless in Gaza before it- weaves multiple intersecting narratives that span time, from Bronze Age Mesopotamia to a Post-Modern city-state.  It’s the epic story of three incarnations of two people- alternately son and mother, husband and wife, father and daughter, savage and scholar, who simply want to return to the home they were brutally evicted from.  Quantum Cannibals brings together authentic cultures and history from Melanesia, Siberia, Europe, the Americas, and more.

Elberg co-edited Zionism, An Indigenous Struggle, which was published jointly by the Canadian Institute for Jewish Research and RVP Press.  It’s an anthology of articles examining the relationship between Native American and Jewish issues, focusing on Palestinian attempts to hijack the Native American struggle for rights and recognition into the framework of Palestinian suffering.  Contributors include scholars, attorneys, Native Americans, Jews, and Jewish Native Americans.