In a city of majesty and brutality, of warring races and fragile alliances, a sacred mermaid has been brutally murdered. An abomination, a soulless Arukh is summoned to hunt the killer. As the world around the Arukh drifts into war and madness, her search for justice leads her on a journey to discover redemption and even beauty in the midst of chaos.

The design concept for this one presented our team with quite the conundrum. Should the cover reflect the wars and violence of the novel? Should it focus solely on the murder of the mermaid? We were going to go down the road of gore and splatter? Or were we going to reach for a restrained concept that conveyed the eerie and suspenseful tension Valdron created in his devastating novel?
And then were we going to go with darkness and moonlight? Text-based? What?
Jeff Minkevics admittedly struggled with this one, but eventually a concept coalesced, and he sent us the preliminary sketch of that vision floating about in his head. 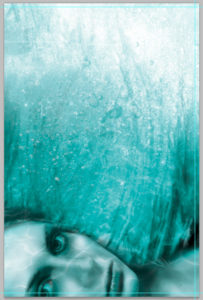 He explained there would be lots more hair floating up over her face, with text and byline in the negative space at the top. We were so impressed by the concept we gave him the go-ahead and asked if he would mind doing another version with her eyes gouged out as they were in the story.
Jeff came back to us with this: 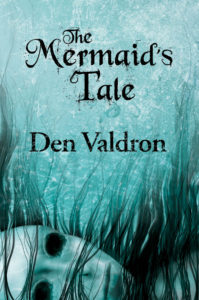 We all felt this concept had no manna, lacked any true emotional impact.
While the cover below did convey creepy, it also lacked manna. 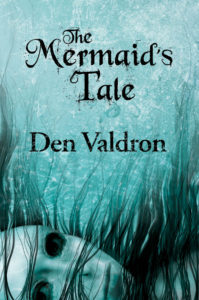 And the one below, like Goldilocks’ bears’ third choice, was just right. Jeff said, “Of the three, I like [this] one the best. For some reason that look she’s got is something just a little beyond sad, or tired. It’s something a bit undefinable, and I really like it. Plus there’s a cool Botticelli Birth of Venus thing going on there with the eyes, and the head-tilt, and the hair.”
We agree.