So it is Dave Duncan has been inducted into the Canadian Science Fiction and Fantasy Hall of Fame. (click for video)

Originally from Scotland, Dave Duncan has lived all his adult life in Western Canada, having enjoyed a long career as a petroleum geologist before taking up writing. Since discovering that imaginary worlds are more satisfying than the real one, he has published more than 50 novels, mostly in the fantasy genre, but also young adult, science fiction, and historical. He has at times been Sarah B. Franklin (but only for literary purposes) and Ken Hood (which is short for “D’ye Ken Whodunit?”).

His most successful works have been fantasy series: The Seventh Sword, A Man of His Word and its sequel, A Handful of Men, and six books about The King’s Blades.
Five Rivers is very pleased to be the publisher for several of his novels, the most popular of which is The Eye of Strife, a court case to ascertain the authenticity of a talisman of terrible power. 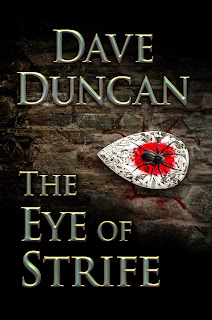 He and Janet were married in 1959. They have one son and two daughters, who in turn are responsible for a spinoff series of four grandchildren. Dave now lives in Victoria, BC.
Congratulations, Dave, on this most remarkable achievement.
19
Oct 2015
By Lorina StephensAwards, Dave Duncan, The Eye of StrifeLeave a comment