New in November: Derryl Murphy’s Wasps at the Speed of Sound

Why We Published: A Method to the Madness, edited by Michell Plested and Jeffrey Hite
Poulsen hits a positive note at recent event
In 2005 Prime Publishing released a collection of short stories by Canadian author, Derryl Murphy, called Wasps at the Speed of Sound.

While the collection went on to receive positive critical and reader response, and hit academic required reading lists, Wasps eventually ended up unavailable and sidelined. Because of the visionary and edgy nature of Murphy’s writing, we thought Murphy’s stories worthy of rebirth.

So it is we’re very proud to announce the return of Murphy’s extraordinary collection, Wasps at the Speed of Sound, releasing November 1, 2013 in both trade paperback ($19.99) and eBook ($4.99), and will be available directly from Five Rivers, as well as online booksellers internationally. 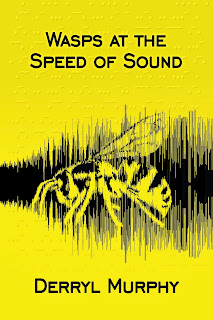 Jeff Minkevics, Five Rivers’ Art Director, wanted to give the collection a sharp, in-your-face cover to compliment Murphy’s stories, and so chose a simple yellow and black presentation, with a wasp flying within staccato sound waves, overlaying a subtle, embossed ground using Morse Code notation. In fact, there’s a message in the Morse Code. First person to figure it out and use the information to email us wins 10 free eBooks of their choice from Five Rivers’ catalogue.

02
Oct 2013
By Lorina StephensDerryl Murphy, Newsletter, Publishing, Wasps at the Speed of SoundLeave a comment