Advance Order and Review Copies for 88 now available
Advance copies of Type now available
It is rumoured Calgary-based author Michell Plested has fallen afoul of forces greater than he anticipated.
The crisis started in 2012 when a conclave of The Super Evil convened at a secret lair in North America to create a guide book for aspiring ne’er-do-wells. The result? A collection of papers known generally as A Method to the Madness: a Guide to the Super Evil, a collection destined to become the international handbook of every evil genius come June 1, 2013. 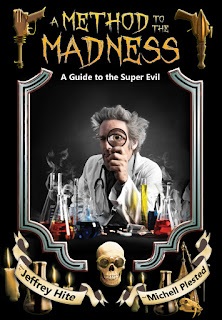 It was agreed such an undertaking required hiring of minion editors, as such a task is beneath the genius of an Arch Villain. And who better to fill those two editorial positions than Jeffrey Hite and Michell Plested?
Jeffrey Hite is co-founder and editor at Flying Island Press, and an author in his own right. Michell Plested is the author of Mik Murdoch: Boy Superhero, podcaster of Get Published, and GalaxyBillies.
Now, however, because of his involvement in the Mik Murdoch project, it would appear The Conclave has seized Michell Plested and his family. He made the following statement on his blog, April 6, 2013:
As many of you witnessed a few days ago, the young superhero, Mik Murdoch (whose adventures are documented in Mik Murdoch, Boy Superhero) posted an opinion piece on this website decrying the bully tactics of certain villains. He had heard through trusted sources that the super-villains of the world (many of whom have written articles for A Method to the Madness: A Guide to the Super Evil) were out to get him.
I saw no harm is allowing Mr. Murdoch to post his thoughts on this website. After all, he has allowed me to document his adventures thus far. What could be the worst that could happen?
That is a question I probably should have explored in greater detail. You see, I was chosen/coerced/press-ganged/drafted by the aforementioned villains to act as an editor for their how-to book (in case you missed it the first time, it is titled: A Method to the Madness: A Guide to the Super Evil and is available for pre-order until June 30th (don’t hate me, I was promised mercy if I pimped the book in this post.) Myself and Jeffrey Hite were to gather the articles and assemble them into a pleasing book that is to be made available to all wannabe villains.
You might see where my roles as editor for villains and documenter of deeds for Mik Murdoch might be slightly at odds with each other.
Apparently, some of the contributors to the Guide took exception to Mr. Murdoch’s comments and to me allowing him to post them on my website. Late last night, my family and I were relocated to the secret undersea volcano lair of the self-styled Lord Aquarius, Master of Oceans. Lord Aquarius has made it very clear to me that in order for my family to continue breathing air (not water or liquid-hot magma), I must cooperate fully with the wishes of the super-villain community.
As such, I feel compelled to state, that while Mik Murdoch, Boy Superhero is the kind of person I always hoped to become, and that his adventures are awesome, I must label him as the worst kind of goodie-two-shoes, interferer there is. Mr. Murdoch must, in the opinion of my self-preserving self, retire from the superhero game effective immediately. To do otherwise will result in the pain and suffering of innocents everywhere (me, for example).
Give it up, Mik! I’m begging you!
Publisher Lorina Stephens, at Five Rivers Publishing, stated she has had no recent contact with Michell Plested or Mik Murdoch, although does admit the collection of articles written by The Conclave is nearing completion and should be ready for the printer tomorrow, April 5, 2013.
“I can only hope cool heads will prevail,” she said. “It is our sincere wish to avoid any untoward confrontation.”
Editor-in-Chief at Five Rivers, Dr. Robert Runté, was unavailable for comment. It is alleged he is planning several trips in the next few weeks, to where and for what reason remains unclear.
08
Apr 2013
By Lorina StephensA Method to the Madness, Jeff Minkevics, Michell Plested, Mik Murdock, NewsletterLeave a comment