John Poulsen talks to us about Shakespeare for Readers’ Theatre

Earlier this year University of Lethbridge professor, John Poulsen, approached Five Rivers with the concept of publishing a series of books based on Shakespeare’s plays, abridged for readers’ theatre. We loved the idea.

The first of that series is now available for pre-order directly from Five Rivers, as well as through Amazon and Barnes and Noble.

Poulsen took time to talk to us about his vision, and where he plans to go with that.

Q: Why do Shakespeare for readers’ theatre?

JP: Shakespeare was a wonderful poet, dramatist and writer. His plays delve into complex and real human emotions that we want to examine. He helps us understand our world and ourselves. I have found that there is a real interest in Shakespeare’s work amongst some young people. I have also found that other young people do not like Shakespeare and find his writing to be incomprehensible. What often stands in the way of their enjoyment is the obscure language that requires work to understand. These abridgements are intended as a taste or sample of the best and clearest of what Shakespeare has to offer. It is hoped that students will engage in these plays, find that they enjoy the poetry, and then become motivated to examine Shakespeare’s work further.

Q: Tell us a little about the origins and concept behind readers’ theatre?

Q: What’s the target audience for this book? Do you see it more as a supplement to drama and English literature departments, or is there a place for this in professional and amateur theatre?

JP: The first target audience for this book is English and Drama teachers of students’ aged 10 to 100. I believe that students can be given one of these scripts and within a half hour can understand and be ready to present Shakespeare. That is, students can very quickly, on their own, in groups, grasp the plot, characters, and themes of Shakespeare’s plays. They can then present these abridged scripts to others.

Q: As a publisher, I was struck with your intimate knowledge of Shakespeare, and your ability to retain the beautiful language of the 16th century. Was that something you were conscious of retaining, or was it just a natural extension?

JP: Thank you for the compliment. I had great clay to work with. Shakespeare is arguably the best writer, ever. It was a privilege to work with his words.

It was fun for me to redo the abridgements. Each time I went through an abridgement I could see it on stage, so in a sense I was not so much writing as directing. I have heard authors suggest that writing is more like being a conduit than a creator. The work itself dictates what is to be done, what is to be kept or what is to be added. That is, there were certain lines, or sections of the plays that could not (or would not) be left out.

Q: This is the first book of a series. What’s next, and how many of Shakespeare’s plays do you foresee being adapted?

JP: I am expecting that this book becomes the first of a series of 10 books that will abridge all 37 of Shakespeare’s plays. I am very grateful for being allowed to play with Romeo and Juliet, Hamlet, and A Midsummer Night’s Dream and hope to have at least as much fun with the next group of plays.

The theme for this next grouping is “Shakespeare’s Greatest Villains.” The plays (The Merry Wives of Windsor, Othello, Richard III, and King Lear) all have strong villains that drive the plot and themes of the plays. Falstaff in The Merry Wives of Windsor is a wonderful villain. He is full of hubris and his punishment for his pride constitutes the majority of the play. Iago in Othello, gains his revenge by trickery, eavesdropping and manipulation. Richard the Third comes to us via Shakespeare as a schemer. His constant plotting to gain the crown has him sacrifice his brothers and his wife to his greed. In King Lear there are a number of candidates for best villain including Cornwall and Edmund, both of whom are abominably greedy and cruel.

The third set of plays will be under the theme of “Strong Women.” The plays of Macbeth, Much Ado About Nothing, All’s Well That Ends Well, and Cymbeline have Lady Macbeth, Beatrice, Helena, and Imogen as stalwart examples of Shakespeare’s most interesting women. 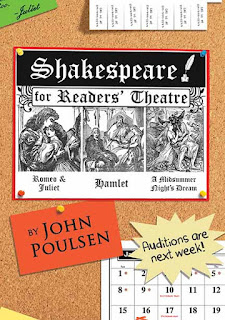 Shakespeare for Readers’ Theatre: Romeo & Juliet, Hamlet and Midsummer Night’s Dream, is now available for pre-order directly from Five Rivers’ catalogue, as well as through Amazon, and Barnes & Noble.  The book releases February 1, 2013. eBook will be available within the next six weeks.