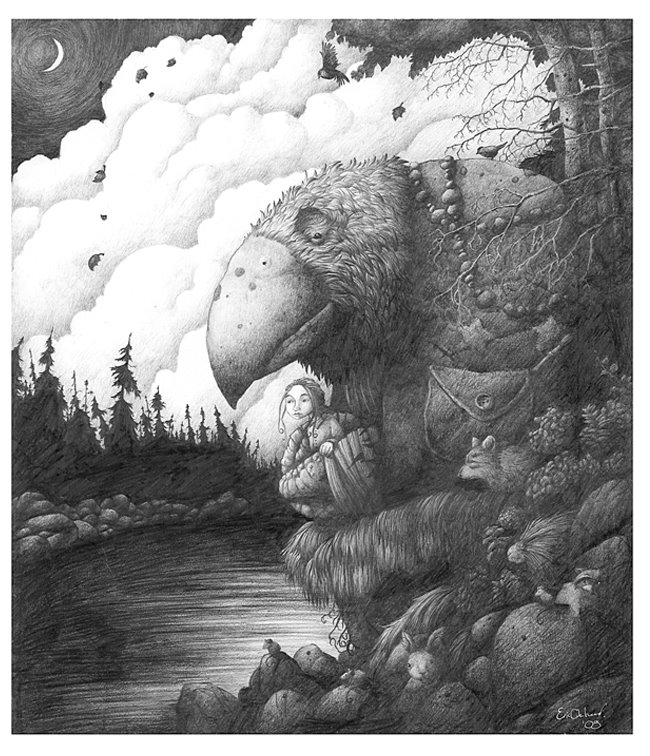 There’s a great deal of celebration at Five Rivers, and much of it has to do with the fact we’ve reached an agreement with Eric Orchard, to create the cover illustration for Simon Rose’s new young adult novel, Flashback.

Eric’s work has to be some of the most dynamic, quirky, original art we’ve come across in decades. His style has the ability to cross boundaries, to speak to both innocence and darkness, reminiscent of 19th century pen and ink, and woodcuts, with something else quite unique and enigmatic.

Eric Orchard is an award winning illustrator and cartoonist living in Canada. He grew up in Halifax, Nova Scotia where he began illustrating stories in grade school. He studied painting and art history at the Nova Scotia College of Art and Design. Eric has illustrated three children’s books. His third children’s book, The Terrible, Horrible, Smelly Pirate was released in the spring of 2008 and was nominated for the Lillian Shepherd memorial award. Eric also illustrated A Forest for Christmas as well as Anything but Hank. In 2008, his work was featured in The Totoro Project charity auction. His work has been recognized in the Spectrum Annual of Fantastic Art and The Society of Illustrators annual exhibit. He also publishes the web comic Harry and Silvio.

Flashback, is scheduled for release Spring 2011. The novel marks a departure for author Simon Rose, as he ventures from children’s to young adult literature in this action/thriller set amid the subterfuge and secrecy of the Cold War, and modern-day societal pressures. Twenty-first century teenager, Max, finds himself transported in time, brought face to face with what he thought was an imaginary friend from his childhood. He was a little boy who liked all the things Max did, enjoyed the same games, and who even looked a little like him. Then one day, Max’s friend said something that scared him. Max never saw his friend again. Until years later, Max’s childhood friend returns, older, wiser and disturbingly real. He tells Max of events hidden for a quarter century, events that someone will go to deadly lengths to keep that way. Max discovers that he is the reincarnation of a boy called David who was murdered years before. To save David, Max must journey into his own previous life, not knowing how his actions will affect what he knows as reality.
You can catch up with Simon Rose in a recent podcast at Irreverent Muse. Eric Orchard can be found through his website.
25
Jan 2010
By Lorina StephensBooks, Eric Orchard, Flashback, Simon RoseComments Off on Eric Orchard to create cover for new YA novel by Simon Rose