Jessica Allain sent along her thoughts on the vision behind the moody and dynamic cover she created for Ann Marston’s engaging new YA fantasy, Diamonds in Black Sand. 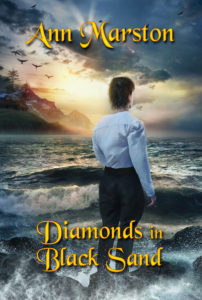 After reading some of Ann’s manuscript, as well as speaking to her about aspects of her book, I began picturing the scene I wanted her cover to reflect.

Growing up beside the ocean, I had a good idea of what a maritime scene should be. Ann described a rocky seashore with small cliffs, which is exactly what I seen each day as a child.

I began assembling the background using a beautiful photo of large ocean waves, and then went on to add in the sky. I wanted the scene to look a bit stormy, but also contain a lot of magical-looking light. Once I was happy with that I added in the cliffs and mountains. After looking at the complete cover we found that adding mountains to both sides of the image really closed off the open ocean look, we decided to only have mountains on the left to keep the right opened up.

Once I was happy with the background, I went on to search for appropriate stock models. There is an unfortunate lack of male historical stock available on stock sites, so it took me quite awhile to narrow it down to three which could have worked.

I knew I wanted to keep a mysterious look to this cover so I thought having the model with his back to use would work well. The first model I chose, I really liked his dramatic pose but ultimately he was too thick-looking to work for this cover, so we decided on a second model with a similar pose.

Making the model fit into the scene involved removing his collar, adding boots and painting in his hair and clothing. Once I had all the elements placed and blended, I flattened the layers of the image and began colorization; this is my favorite part of editing as this is where the image comes alive.

I had a great time doing this cover and am very happy to be part of it.

Diamonds in Black Sand is available in both trade paperback and digital book, directly from Five Rivers, and your favourite online bookseller.