I know, I know, I truly am hopeless at promoting myself, of keeping people up to date on what I’m doing. But mostly it’s because I’ve convinced myself no one’s listening. Now, that’s not meant to sound like a sucky-baby statement. Just being very pragmatic. It has been my experience with social media of any sort that mostly people aren’t paying attention to all the white noise out there, and my voice is just one small blip in that wave of noise. Always seems like there are more productive ways for me to spend my time.

However, here am I, giving anyone who’s listening a ‘hale and hearty, well met’.

So what have I been doing?

Well, it’s summer, so mostly garden stuff, mostly vegetables, because the perennial beds pretty much take care of themselves. 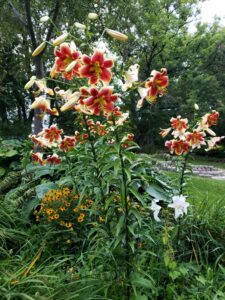 Today’s vegetable harvest has manifested in drying plum tomatoes. After 10 or so hours in the dehydrator, I’ll blitz those delicious, red jewels in the food processor, and freeze that for winter use. It will be a wonderful memory of summer.

But are you writing?

I have been writing short stories, so there is that. In fact, a lot of short stories, eight this year. And that’s kind of strange, because I’ve previously found that form of writing a bit of an anathema. But somehow I’ve come to a new perspective regarding the literary form, and found it challenging and inspiring to craft a well-told story in under 2000 words. That word limit is purely my own discipline, because previously I’ve mostly written short stories in the range of 2400 to 6000 words.

Then there was the panel I took part in for When Words Collide, on Baking, Brewing, and Babies. It was a fun and lively discussion about accuracy in material and domestic culture in any genre, and the importance of primary source research. The 2013 When Words Collide festival will be taking place in person rather than virtual. While that’s wonderful for many people, for me it means I won’t be participating, as I don’t travel for that sort of thing. Silly, I know, but that’s part of the nature of being a reclusive type.

And what about painting?

I’ve also been accepted to an online art gallery at Canada On Canvas. Right now there are six of my paintings available there, which you can order as a canvas gallery wrap, framed print, fine art print with mounting, metal/wood prints, plaque mountings, plexi face mount, greeting cards, and fabric dye – sub printing. These can be had in a variety of sizes, customized to your specifications.

Of course, the originals are available through this website as well.

Once the vegetable harvest has settled down, and we start to snug up in the Old Stone House for the winter, I’ll return to laying down tracks for the audiobook of The Rose Guardian. I’m aiming to have that available by the close of the year. Then during January 2023 I’ll forge ahead with the audiobook production of Dreams of the Moon.

I also want to plunge deeply into writing Hekja’s Lament, the historical novel which is based on the Viking settlement at L’Anse aux Meadows CE 1023. There’s just one tantalizing bit of research I have yet to complete, and that revolves around a garment the slaves known as Haki and Hekja wore, referred to in The Viking Sagas, known as a bjafal, which is described as a hooded garment open at the sides, with no sleeves, fasted between the legs with a loop and button. I can find no historical reference to such a garment, but for one tantalizing description of an Inuit garment very much like the description in The Viking Sagas. If the garment is, in fact, of Inuit culture, then that may very well through the entire plot into disarray. So, until I have that matter resolved, I am reluctant to continue. Wish me luck!

So, that’s all for now, dear readers. Wishing you contentment, laughter, and good health, as always. Let me know what you think of my books either by leaving comment here, or by posting on your social media, Goodreads, or Librarything, or your own blogs.