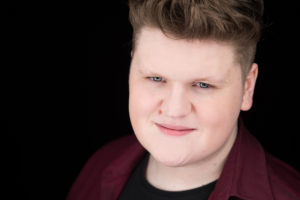 In the autumn of 2017 the first novel of Ann Marston’s popular fantasy series, Kingmaker’s Sword, releases as an audiobook. The novel is skillfully narrated by voice actor, Austin Vanfleet.

Austen talks about his method of narrating, something, which it turns out, is quite deep and sensitively produced.

I approach narrating and producing audiobooks with the same process I would use for playing a character on stage. In my opinion, a good audiobook begins with a good performance–and it is just that, a performance. Even though you’re sitting in a booth in front of a microphone (in my case, usually in the middle of the night), you, the performer, still have to find a way to connect emotionally with your audience and evoke both catharsis and empathy. You have to find a way to make your listener live vicariously through you.

For me, this process begins with emotional honesty and vulnerability, and a connection with the target, as Declan Donnellan calls it, of whatever role I’m playing. If this is the third-person omniscient narrator, that target is clear and engaging communication of the events in the text; if this is a character, it means bringing life to their emotions, their struggles, their worries, needs, and dreams, as best I can, and creating a character that not only sounds real, but feels real. Like any performance art, I believe the objective is to communicate an additional layer to reality, something deeper than simply words, but emotions and impressions, things that communicate with the heart and the soul, in the same way that words communicate with the mind and the intellect. That, I think, is where the real impact of a story is felt, and my objective for my performance is to make that layer of the story as available and accessible as possible.

That connection with one’s audience is what I live for–it makes me feel alive and vibrant, and it also brings me a great deal of meaning, because I think interpersonal connection, and being able to see a person as real enough to connect with them emotionally is what makes life worth living. That’s what makes me tick artistically, is being able to find something universally human, through which two people can come together. The feeling is less visceral, obviously, when you’re listening to an audiobook, as opposed to watching a great performance on stage, but my hope is that audiobooks are just the beginning, and that I’ll be able to build a larger voice acting career on my work as a narrator, and from that springboard into film and television, which has been my dream for years.

As far as accents go, they’re a passion of mine. I love studying them and learning to do them well, because I think they’re the most fun part of doing a character. Scottish has always been one of my favorites–I think it’s hands down one of the sexiest accents in the world. You’ll never catch me doing them in public unless I’m performing, simply because I’m shy, but I love using them for characters and narrations, and I feel more at home in dialect than I do in my natural accent, which is American.

Watch for the audiobook release Autumn 2017 of Kingmaker’s Sword.