A Poisoned Prayer now in audiobook 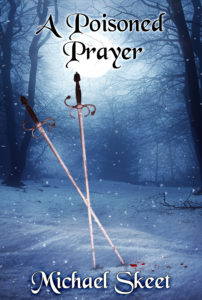 Dashing swordsmen compete for the favours of licentious women, and magic—God’s Blessing—is strong enough that prayers really are answered.

The author, Michael Skeet, is an award-winning Canadian writer and broadcaster. Born in Calgary, Alberta, he began writing for radio before finishing college. He has sold short stories in the science fiction, dark fantasy and horror fields in addition to extensive publishing credits as a film and music critic. A two-time winner of Canada’s Aurora Award for excellence in Science Fiction and Fantasy, Skeet lives in Toronto with his wife, Lorna Toolis.

The book is skillfully narrated by Geoffrey Boyes, an ex-pat Australian living in the United States for the past 30 years. He is an industrial chemist and inventor. A member of Toastmasters, he is one step from a Distinguished Toastmaster, an organization that has helped to hone his speaking skills. After 10 years of volunteer work, reading the newspaper for the visually impaired, and 30 years of hearing American females say, “I just love the way you talk,” he realized he had a natural asset worth marketing.

Where to find A Poisoned Prayer

A Poisoned Prayer is available in trade paperback, eBook and audiobook. The first two versions are available through your favourite online booksellers around the world, as well as directly through Five Rivers. The audiobook is available exclusively through Amazon, Audible and iTunes.