Review: Thraldom: A History of Slavery in the Viking Age, by Stefan Brink
Review: The Centaur’s Wife, by Amanda Leduc

Apparently. Throughout my life I’ve thought: am I capable of doing that? Usually, after much research, the answer comes back: Not sure, but why not?

Whatever adventure you choose to undertake it’s usually about lots of research and lots of pig-headed determination. In this case, it was to record and produce my own audiobooks.

While I do believe audiobook producers, good ones, certainly are worth every dollar you pay them, for most of us indie writers it’s a luxury to undertake to pay for audiobook production. The costs are considerable, sometimes as much as paying a good translator to undertake your work. What does that mean in real dollars? Often four figures. And for most of us, four figures usually doesn’t even come close to what we earn in a fiscal year. For some, like the indie dynamos Krista Ball and Tracey Cooper-Posey, it’s quite otherwise. But I’m not one of them. So, it’s definitely research and DIY.

My first point of research was to tap the knowledge of three audio producers I admire and respect, individuals I know will always give me the straight facts and good advice. The first is Austin VanFleet. I first met Austin when I was publishing a number of Canadian authors through Five Rivers, and contracted him to produce Ann Marston’s Rune Blades of Celi series. He’s extremely talented, with a rich, tenor voice, impeccable production standards, and incredibly creative when it comes to realizing the scope and mood of a story. The second is Michael R. Fletcher, another author I had published, who went on to a successful indie career. In Michael’s murky and questionable past he was affiliated with a few rock bands, did the audio production for them as well, so legend tells, and these days, when the writing muse is fickle, he apparently communes with dopples and creates, um, music? Michael gave me a down and dirty quick and simple solution to getting into audiobook recording. The third is Joe Mahoney, a writer I was pleased to publish through the house, and an individual with a remarkable pedigree through 30 years with CBC as recording engineer, producer, and several operational management roles. Joe gave me a no-nonsense approach to audiobook recording, very achievable, very affordable.

Then came the equipment

My dear husband, Gary, ever-supportive of my adventures, purchased a Blue Yeti microphone, which had been recommended by all three of my mentors, a good quality pop filter, headphones, and a mic boom, all as Christmas presents. It took me a year to gather enough courage and research to actually set about recording seriously. What catalyzed that change was during my Zoom book launch during the summer of 2021 for Dreams of the Moon, which Graeme Cameron very graciously hosted, and Joe Mahoney presented. I did several readings, as is expected at these things, and to my surprise people commented on how well I read. That was enough encouragement to allow me to make the leap into audiobook production. So, I downloaded Audacity, which my advisors had recommended, and throughout November and December 2021 I recorded Caliban.

what’s with all the slobbering and popping tees?

Reading during a book launch is one thing. Reading into a sensitive mic, even with a pop screen, is quite another. I was appalled at not only how much my narrations changed in pitch and tone depending on the character and action, but at all the really gross mouth sounds. I mean ewwww! And then there were the moments when mouth, tongue, teeth all refused to cooperate and produce intelligible words, and consciously I knew I had to stop, but instead just kept muttering things like ohferfuckssake. So, while I beetled through laying down tracks, I soon discovered I needed to do a lot of post-production editing. Thankfully, Audacity made that really easy, so that between deleting some of the more egregious flubs, slobbers, and pops, and, well, creative cussing, often re-recording those sections, and then applying a noise reduction tool to the tracks, I was able to come up with something that could then go on to the next stage, which was meeting distribution channel quality control.

Kobo was a breeze

The user interface for Kobo, and their apparent lack of quality control standards, made uploading files and preparing for sale a ridiculously simple process. Basically I didn’t have to do any further production to the audiobook and was able to simply use the noise-reduced MP3s. Everything passed their vetting process, and within 48 hours Caliban was live on their site.

ACX is another beast entirely

I figured the standards for ACX would be far more stringent, if my experience previously contracting royalty-share audiobooks through their system was any indicator. And indeed that was the fact. There were several technical issues which needed to be addressed, all in a language I didn’t understand, involving tech which was all confusingly new to me.

Thank the gawds for Google. It’s amazing what you can find there. And, lo, after a day thrashing about in the wilderness, attempting adjustments and finding they’d failed, I came across a post on Audacity’s own forums, from one of Audacity’s techs, addressing the very issues I was facing with ACX. Apparently this is common. And his three step process to fixing the problems was spot-on, simple (if time-consuming, because every track had to go through the adjustment process) and in the end the production was approved by ACX and I was able to have the audiobook approved.

There was an almighty HALLELULIA went up to the stratosphere from Neustadt.

The distribution of the audiobooks 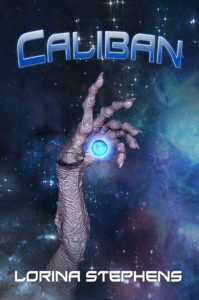 I chose to take a lower royalty with ACX, which means I retained global distribution rights rather than grant them exclusivity for a higher royalty, and was able to then take advantage of Kobo’s distribution channels as well. So, Caliban in audiobook format is available through Audible, Amazon, iTunes, Kobo, Indigo, Walmart, BOL, and Booktopia. Will I sell any audiobooks? Who knows? But if you don’t try, you don’t get.

Will I produce more audiobooks

That’s an big old fat yes. Next week I’ll likely start laying down tracks for The Rose Guardian. I’m hoping to have that finished and distributed by spring. Then come the fall, I’ll launch into recording my two short story collections, And the Angels Sang, and Dreams of the Moon.