New YA fantasy from Dave Duncan 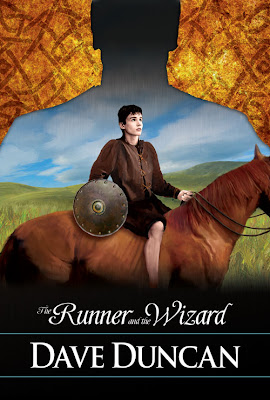 This is to be the first of a series of novelettes about young Ivor, who dreams of being a swordsman like his nine older brothers, but until he can grow a beard he’s limited to being a runner, carrying messages for their lord, Thane Carrak.

That’s usually boring, but this time Carrak has sent him on a long journey to summon the mysterious Rorie of Ytter. Rorie is reputed to be a wizard—or an outlaw, or maybe a saint—but the truth is far stranger, and Ivor suddenly finds himself caught up in a twisted magical intrigue that threatens Thane Carrak and could leave Ivor himself very dead.

The amazing cover is designed by Five Rivers’ Art Director, Jeff Minkevics, who wanted to create a cross-over between the fantasy paintings of the genre’s covers, and something completely fresh and graphic.

Originally from Scotland, Dave Duncan has lived all his adult life in Western Canada, having enjoyed a long career as a petroleum geologist before taking up writing. Since discovering imaginary worlds are more satisfying than the real one, he has published more than 45 novels, mostly in the fantasy genre, but also young adult, science fiction, and historical. He has at times been Sarah B. Franklin (but only for literary purposes) and Ken Hood (which is short for “D’ye Ken Whodunit?”)

His most successful works have been fantasy series: The Seventh Sword, A Man of His Word and its sequel, A Handful of Men, and six books about The King’s Blades.

He and Janet were married in 1959. They have one son and two daughters, who in turn are responsible for a spinoff series of four grandchildren. Dave now lives in Victoria, BC. A detailed discussion of his work from Gale’s Dictionary of Literary Biography is available for download from Amazon.com

The second novelette of the Runner series, The Runner and the Saint, is already in editing.

The Runner and the Wizard releases October 1, 2013, and will be available in 6 x 9 trade paperback and eBook directly from Five Rivers, Dave Duncan, and major online booksellers worldwide, as well as through the Espresso Network.

13
Sep 2013
By Lorina StephensDave Duncan, Newsletter, The Runner and the WizardComments Off on New YA fantasy from Dave Duncan