DD: What you mean is, “Where do you get your ideas?” I used to be asked that when I talked to grade school classes, and I never dared tell them the real answer because the boys would grab a double meaning instantly.  The real answer is: in bed.  My right hemisphere scenario gyrus has a bad habit of digging me in the ribs about 3 a.m. and whispering something like, “What will happen if you have Juliet murder Romeo in Act 4 with an axe?” Along those lines anyway.

Remember that I was a professional geologist for slightly longer than I have been a writer. One thing geology gives you is a true conception of time, which most SF writers totally lack.  Their heroes discover “ancient” civilizations that perished some thousands of years ago. (The artists of the Chauvet cave lived around 30,000 BCE and were as gifted as any our species has produced since.) In a galaxy about 13 billion years old, even a 100 million years would be virtually contemporaneous with us. Idea#2: geological-scale time travel.

Not dinosaurs, though!  They’re passe, and Ray Bradbury wrote a Cretaceous TT story in A Sound of Thunder back in 1952 (Oh, that makes me feel archaic). My mind’s eye soon fixed on a period some 16,000,000 years after the Chicxulub meteor fell, when the birds and mammals were competing to see who would succeed the big lizards. The world was very different back then: geography, climate, even the make-up of the atmosphere. We know quite a lot about it now, so Idea #3: welcome to the Eocene.

And if such TT was possible, half the scientists in the world would be offering their firstborn for a ticket to go there: geologists, astronomers, biologists, arachnologists… the lot.  Idea #4: a research station full of eager young post-docs.

It seemed obvious (to me anyway) that the protagonists must be different, so I settled on an auditor, and gave him a motive (fleeing from mob violence designed to prevent him from testifying). By then I was at the keyboard.

LJS: Certainly your irreverent wit comes into play in this novel. You’ve given your hero the moniker of K.N. ‘Cannon’ Ball, and his wife that of Tempest Fugit. It’s only left to ask: why ever?

Also, leaving scientists out of it, why would sane people ever want to go back to the Eocene, full of gigantic predatory birds and carnivores bigger than polar bears? This is a man-meets-monster story, so it’s over the top and not to be taken seriously.  Cannon is a great guy, although he definitely has faults.  His marriage with Superstar Tempest is weirdly irregular.

LJS: I suspect there’s a bit of the boy coming out in this novel, in that you’ve pursued subject matter of fascination to many a young child. Were the early epochs of Earth of interest to you as a kid?

DD: More than a bit!  I recall my wife telling me some years ago that I’d never grow up, and me retorting that if I did I wouldn’t be getting all these books published.  And, yes, I was a geeky kid long before dinosaurs were a boy’s best friends. Then geology, remember?

LJS: Give us a wee peak at what we can expect in Eocene Station. 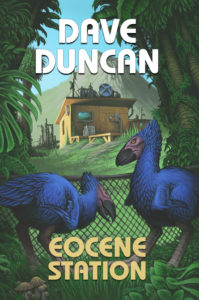 DD: Cannon and Tempest flee for their lives back to the Eocene, and discover that things are coming apart there, because governments are cutting off the money. The world back then is very strange and alien, based on what is known about it. There’s thrills and danger, certainly, but I always try to put some humour in my books, because when things look bad, people crack jokes to show that they’re not scared. Also they entertain the reader. Sample:

“I was told you looked like [Michelangelo’s] David, but you don’t have a squint.”

“I had it fixed with the money I got for modelling. I had to stand there bare-ass for two years to earn it.”

“Signor Buonarroti must have been expecting you to grow a lot taller when he ordered the marble.”

“He was convinced that Goliath was a dwarf being mocked by a hostile Israelite press.”

Cannon groaned. “Will you two stop that? Let’s all go to lunch.”

LJS: Eocene Station marks over 50 novels to your credit. Where are we at in that count?

DD: That depends on how you count them. Five Rivers published a trio of my novellas about a boy in Dark Age Scotland, the “Runner” series, and then collected them into an omnibus, The Adventures of Ivor.  Is that four books, three books, or one book?  I think this one is somewhere at or between 50 and 54.

LJS: It becomes apparent you’re becoming more, rather than less, prolific as the years go one. Do you feel that’s true, and if so, to what do you attribute that?

DD: Not really.  My first novel came out in 1986, 30 years ago, so I’ve averaged less than two a year and this year I don’t expect any more than Eocene Station. Probably two next year. I’ve also been polishing up some MSS I had in the metaphorical drawer, and one that is due out in 2017 has been gestating for 10 years.

I like Eocene a lot. It’s definitely off the beaten track.