In memory of H.A. Hargreaves

Received news early this a.m. H.A. Hargreaves died, peacefully, wife Lee and daughter Alyson with him. His last hours were spent being read to, hugged, loved. A man so worthy of kindness, consideration, admiration. In everything he did he exercised those qualities without stint, without thought of any kind of return. He was just simply Hank. And I am so inexpressibly sad he is gone, but also so very pleased I had the pleasure to know him, share correspondence and thoughts, even laughter through letters and emails.

I was introduced to Hank Hargreaves through Robert Runté, when Robert suggested we approach Hank about republishing his collection of short SF, North by 2000. We did just that, reissuing it with his entire canon of short SF under the title North by 2000+. The cover for it was the first undertaken by Jeff Minkevics for Five Rivers. And I was completely enthralled by the stories I typed into usable Word documents and then typeset. These were the kinds of stories that had first nurtured my love of good SF. Stories like those penned by Sturgeon, Clarke and those legendary greats. How was it I’d never heard of H.A. Hargreaves? Hanks’ stories were about people trying to deal with the extraordinary circumstances of future societies. There were no dystopia in Hank’s worlds. There were possibilities. He posited thoughtful, intelligent what-ifs, always working toward reasonable and equitable compromise in his plots and characters, never at gunpoint, never with the blam and bling that has proliferated so much of modern SF&F. Hank’s stories are reasoned, moments of sanity in insane situations. 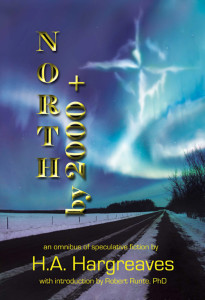 And that, quite simply, is exactly how Hank seemed to navigate his life.

In reviewing my correspondence from 2011 to present, that sane approach to life’s sometimes unreasonable situations permeates. Always he sent concern I should not overwork, even while he himself faced an increasingly uncooperative body while dealing with fence damage after a windstorm, or frustrations with having to cope with new technology at the age, then, of 85.

And while most of his readers will remember him for his body of SF, written during two-week holidays over his teaching years, the stories that touched me most were those which were eventually collected into Growing Up Bronx. It is in these stories we truly come to know what shaped the man, and stories I believe are his most poignant and brilliant. If you want to understand what was the inspiration for the stories in the collection North by 2000+, then you need to read Growing Up Bronx. 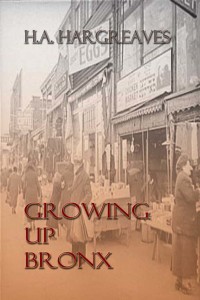 In Hank’s later years he’d hoped to write his memoirs in a collection that was to be called Mount Allison Daze. Between Lee, Alyson and me we encouraged him to continue, and it would have been my great delight to have published one last work of his. Alas, this never came to be, beyond a few snippets he sent along, and perhaps a few squirreled away in the copious papers that were part of Hank’s private life.

So, it is with the greatest respect and love I give you two of those small snippets that were to be part of Mount Allison Daze, in memory of a dear friend and colleague.

A few lonely flakes of surely early snow drifted by as I stood at what seemed to be (and was) the main intersection of Sackville. Looking up the slope of York Street, I could see busy activity amid the buildings of what must be Mount Allison University’s campus. A fairly strong breeze cooled my cheeks, as fingered its way through my suit jacket. Still, I took my time looking around. After all, this was likely to be my home for at least one year, and possibly four.

Pulling my jacket closer, I considered the week just past. September 7th I’d reached the end of a three-year-plus minority cruise in the U.S. Navy. That had eventually culminated in entry to the Submarine Service. On September 8th I’d turned 21, celebrating by hitch-hiking from Boston to my estranged home in North Bronx. The greeting was, as I expected, strained. The Navy had been a bad enough decision for my father and step-mother to swallow, but now I was going to leave the country and enroll in some Liberal Arts school. I’d given up stressing that Mount Allison was a full-fledged university, with a very fine reputation. But Canadian? As if an American school wasn’t good enough, I’d given up engineering and wasted my GI Education Benefits on some small Canadian joint recommended by the Rev. Bragg, a weakling opposed to war. Forget that this was fall of 1949.

Now, trying to shut out those few recent painful days, I picked up my duffle bad and strode up the hill, to enroll and begin a new life.

First real snow of the season. A heavy, wet snow that’s finally clinging to the trees and shrubs, covering the ground thoroughly, turning the view into a virginally pure, unbroken and unblemished perfection. A good day to begin writing again. Anything. Memories of Sackville and Mount Allison, usually not long after I returned in the fall. It had a certain poignant appeal, that scene, despite the hint of melancholy in it. Another year in my only real home, feeding my growing love of the institution itself, but doing little to help me become a social being. It seemed too difficult to bridge the gap created by my characteristics, real, or imagine by classmates who, consciously and sometimes nastily in the case of the engineer/athlete/macho set, unconsciously but nevertheless painfully in the case of others, expected and therefore found what their elders held against all Yankees. Oh, most people would say that this was mere youthful playfulness, not intended to hurt, that I must have been far too sensitive although I gave just the opposite impression. I was at times prickly as a porcupine. Well, it was so long ago that I may be inflating the situation.

Yet I must say that even Bob and Harry, the two members of our quartet who lived in nearby Moncton, never once invited me to any social event they attended at home. Was I that aloof and self-contained that they wouldn’t think I might want some company on a weekend, especially a long one when the vast majority of students went home throughout the Maritimes to be with families and friends? Certainly they knew on two Christmas holidays, when the residences were closed as always, that I lived in a rooming-house in Moncton near the rail-yards, where I worked from 11 p.m. to 7 a.m. for CN Express. Admittedly the weather was bitter cold; I was out working the cars virtually the whole time, and I slept most of the day. Only evenings before work were available, and neither Bob nor Harry was usually home.

One one of those occasions I collected by cheque on the 23rd and hitch-hiked to the Bronx where, arriving late Christmas Eve, I found despite having written of my plan that they’d sent my present to Sackville. Those I had sent, however, were under the tree, and it should have been fun to watch them being unwrapped. I must not have chosen wisely, because they were greeted with clear indifference. The other year I left Moncton on the 23rd by bus for Montreal, where I stayed with the MacHaffees, enjoying a marvelous time as Rissie and Pat drew me into their social whirl with friends who were themselves mostly home for the holidays. One of the best Christmases I can remember celebrating. Went back to Mount Allison on the train, where even those with roomettes spent the whole time in the coaches, singing and talking all night. I was broke, but very happy when I arrived at school, and the glow lasted for quite some time. In my senior year I went back to the Bronx to be greeted coldly, because I’d spent two Christmases away, though there was only room for me to sleep in the small front room now used for storage. No sleeping on the fold-out in the dining room, as it was to be used for several dinners with guests.

Ah, but no more of this. The only thing lacking right now is some sun to bring the terrific sparkle to everything and the mood will brighten considerably too. And so, to begin the affairs of the day.

So, dearest Hank, wherever you now are, as I once wrote to you in one of our missives: go settle yourself into your favourite chair, dogs at your knees, and like the lord of the manor, favourite cardigan draping round you, be prepared for a windy, chatty letter.

I will miss you.