Allow me to introduce: Susan Forest

Susan first came to my attention in 2011 after an introduction from Robert Runté. He suggested we consider putting together a collection of Susan’s stories. After reading her work, I was convinced this was exactly the kind of provocative speculative fiction I wanted to champion, and so we entered an agreement to publish Immunity to Strange Tales.

Three-time Prix Aurora Award finalist, Susan Forest is a writer of science fiction, fantasy and horror, and is an Aurora-winning fiction editor for Laksa Media Groups. Several of her past short stories are available to read on Curious Fictions, where you can subscribe to her updates. Her novel, Bursts of Fire, the first in a seven-volume YA epic fantasy series, the Addicted to Heaven Saga, will be out Spring 2019 from Laksa Media, followed by Flights of Marigolds (2019). Her young adult fantasy, The Dragon Prince, won the Children’s Book Choice Award. She has published over twenty-five short stories in Canada and the United States. Her works have appeared in Asimov’s Science Fiction, Analog Science Fiction and Fact, OnSPEC Magazine, three of the Tesseracts anthologies, AE Science Fiction Review, Beneath Ceaseless Skies, and the Aurora-winning Blood and Water, among others. Her collection of short fiction, Immunity to Strange Tales, was published by Five Rivers Press, and her nonfiction has appeared in Legacy Magazine, Alberta Views Magazine, and the Science Fiction and Fantasy Writers of America Blog. Her short stories, “Back,” “Turning It Off,” and “The Gift” were nominees for the Prix Aurora Award, and her novella, Lucy, won the Galaxy Project, jurried by Robert Silverberg, David Drake and Barry Malzburg. 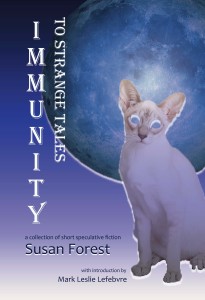 Studying with the greats

In writing-related activities, Susan is a member of CAFE (Calgary Association of Freelance Editors). Technicolor Ultramall, a book she edited for Edge Science Fiction and Fantasy Publishing, was a finalist for the Prix Aurora Award in 2013, and Strangers Among Us for Laksa Media Groups won the Aurora for 2017. The second in Laksa Media’s social issues anthology series, The Sum of Us, was released in 2017 and Shades Within Us is forthcoming in 2018. She has appeared as a panelist at a number of science fiction and fantasy Conventions: World Science Fiction conventions in Denver, Montreal, Reno, Chicago, Spokane, and Kansas City, World Fantasy Conventions in Calgary, Columbus, San Diego, Toronto, Washington, DC,  and Saratoga, and several smaller conventions (Calgary, Winnipeg, Toronto, Ottawa, Vancouver). In 2013, Susan judged the Endeavour Award for books published in the Pacific Northwest, and twice judged the Robin Herrington Memorial Short Story Contest in Calgary. She contributes to Calgary’s annual literary festival, When Words Collide, as their Grants Liaison, and is past Secretary for the Science Fiction and Fantasy Writers of America (SFWA). Susan teaches for the Alexandra Writers’ Centre (multi-week novel and speculative fiction courses, and weekend-intensive courses) and presents annually at the Calgary Young Writers’ Festival.

Outside the world of writing, Susan is a visual artist and the mother of four. Her husband writes a regular column for Alberta’s Rocky Mountain Rail Society News and his non-fiction has appeared in McLean’s Magazine. Her eldest daughter, Heather, is currently pursuing her Doctorate in Creative Writing at the University of Calgary, having completed her Masters Degree in Science Fiction Studies at the University of Liverpool; Heather has a number of publications to her credit and is the mother of one. Susan’s son, Alec, has presented her with three wonderful grandsons, and daughter Holly works as an artist at the Banff Center for Creative Arts, while Amy is studying at the University of Calgary.

Prix Aurora Award, 2017, Winner, “Strangers Among Us: Tales of the Underdogs and Outcasts,” Laksa Media, August, 2016

Book Publishers of Alberta Award, 2017, Winner, “Strangers Among Us: Tales of the Underdogs and Outcasts,” Laksa Media, August, 2016