Dave Duncan fans: one last time into the fray! 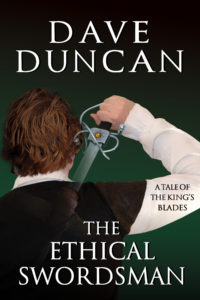 The last and final novel in Dave Duncan‘s hugely popular Tales of the King’s Blades series, The Ethical Swordsman, releases August 1, 2019, and is now available for pre-order in both trade paperback and ebook through Five Rivers, and your favourite online bookseller.

In this final installment, written just before Dave died, he examines the meaning of personal integrity in the face of political expedience.

Niall’s father taught him about honour, about the value of a man keeping his word. And this is a tenet by which Niall has lived his life, even while training to be a Blade.

Now, however, King Ambrose is dead, and his daughter, Malinda, wears the Chivian Crown, and even as Niall is made Prime of the Blades, he’s been put under dire oath to the Queen, made a spy, and about to face a challenge to everything he had been taught about honour and the privilege of being a Queen’s Blade.

In this the last of the King’s Blades series, Dave Duncan takes his readers on a high adventure and what will be remembered as a deeply satisfying conclusion.

Foreword by Lorina Stephens, from The Ethical Swordsman

I received the manuscript for The Ethical Swordsman from Dave Duncan early in 2018. He was quite keen about it. I think The King’s Blades series had been Dave’s favourite world, one of swashbuckling characters, Errol Flynn hijinx, and utter escapism.

That Dave was still writing was a wonder to me, as he’d suffered a stroke two years previous, and was chaffing over the concept of retiring. I remember clearly in one correspondence of ours him lamenting that he might very well have to shelve his pen and discover what retirement would look like.

Having witnessed what happened to many of my acquaintances and friends upon retirement, I suggested moderation was perhaps the more prudent course, that he couldn’t very well turn off what he was—a writer—but that he might want to slow down a bit, enjoy time with his wife and beloved of 59 years, because we, none of us, were getting any younger. Time, or the lack of it, is an imperative which simply cannot be ignored.

That conversation happened in August 2018. Dave, still writing, left the world in October.

And in the wake of that sudden and astonishing event, The Ethical Swordsman remained on my desk, part way through an edit. It was to originally be published February 1, 2020. But now all of that seemed ridiculous. What were schedules and time constraints in the wake of the reality that Dave was not here to fuss over editorial suggestions?

So I did some fussing of my own, spent a few sleepless nights, wondering how on earth to do homage to the man who had spent his life as a writer of fantasy and science fiction after being a petroleum geologist? How to do justice to the individual who had been a founding member of SFCanada, and had been inducted into the Science Fiction and Fantasy Hall of Fame?

It seemed to me the only way to do justice to Dave, and to offer an insight for his many, many thousands of fans worldwide, was to publish this novel, The Ethical Swordsman, the eighth of the King’s Blades series, as Dave had written it. The manuscript has only been copy-edited in the interest of consistency and the strictures of the English language. What you’re going to read is pure, unadulterated Dave Duncan.

There will be further audiobooks released in the coming months and years, all productions of his previous work.

But The Ethical Swordsman is the last original Dave Duncan novel you will ever escape into, because there are no more.