Cover designer, Jeff Minkevics, took the time to discuss the concepts and vision behind this glorious, hot cover. 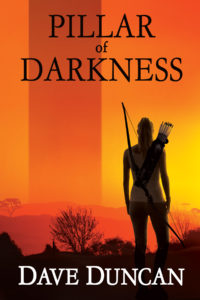 The basic premise for this cover design was to do up an imagined moment that, while not explicitly described in the book, might have occurred at some point in the story. The theoretical scene involves Rita, our main character (described to us as a blonde ‘well preserved’ woman in her thirties) looking out towards Sungoback—the mysterious and impossibly large pillar that appeared in Africa over thirty years ago.

Rita’s wearing light, modern clothing that looks as though it were chosen for practicality rather than appearance, but she’s also sporting a bow and a quiver of arrows, which aren’t considered particularly modern or practical. The juxtaposition of these two things leaves you with questions regarding why, which end up being answered fairly quickly inside the story itself.

I wanted the environment to come off as hot and oppressive, hazy but with those rich yellow/oranges we tend to associate with pictures of African sunrises and sunsets. I also wanted the silhouette of the pillar to be indistinct and shrouded by haze, but quite obviously a very great distance away. The goal was to leave the viewer with the sense that Rita is at the beginning of her quest, staring out at her destination, considering both the staggering monolith before her and the hardships that await her. The bow and quiver of arrows she carries further adds to this narrative, perhaps suggesting that while she knows where she needs to go, her actual goal might involve something other than simply arriving there.

Pillar of Darkness will be available for pre-order September 1, 2018. Review copies are available upon request.