The Gilded Chain now in audiobook

Creepy books for Halloween
On being a small publisher 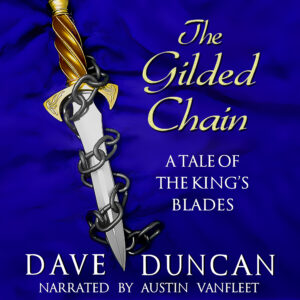 This introduction to The King’s Blades sets the stage for the eight novels which streamed from that remarkable imagination of Duncan’s. As unwanted and rebellious boys, the King’s Blades find refuge in Ironhall…. Years later, they emerge as the finest swordsmen in the realm—a magical ritual of a sword through the heart binds each to his ward—if not the king himself, then to whomever else the monarch designates—with absolute loyalty.

And the greatest Blade of them all was—and is—Sir Durendal.

Austin Vanfleet, with his usual panache, breathes life into Duncan’s characters with his expressive and clear narration, continuing the tradition he started with One Velvet Glove and The Ethical Swordsman.

Where to purchase the audiobooks

The audiobooks are available for purchase through Amazon, Audible, and iTunes. Don’t forget to leave a review.