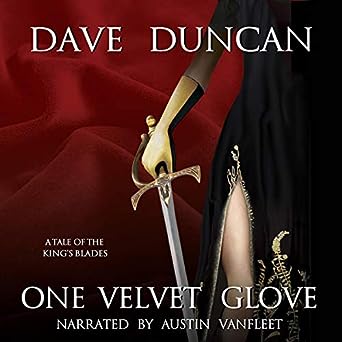 Austin Vanfleet returns with a fabulous production of Dave Duncan’s swashbuckling adventure, One Velvet Glove, one of the King’s Blades series.

This is an unabridged production which brings to life all the intrigue and suspense readers have come to expect from Dave Duncan’s novels. Picking up where he left off, Dave brought back much-beloved characters for this tale.

So what happens next?

Sir Rhys, Sir Sharp, and Sir Trusty—three of the world’s greatest swordsmen—are released from the Royal Guard in their 20s with no pension, no job, and no money. Rhys’ father is the great Blade hero, Sir Spender, who finds himself in the same predicament. Spender knows of a fabulous treasure that was lost more than 30 years ago and thinks he knows where it may be. Why shouldn’t the four of them go and look for it?

But King Ambrose also remembers that treasure and believes it belongs to him. Why shouldn’t he try to stop them?

Audiobook is available through Amazon, Audible and iTunes.

We know you’re going to love this.